On a sunny October Saturday in 2021, nine race cars zipped around the Indianapolis Motor Speedway at speeds that reached over 240 kilometers per hour (150 miles per hour). None of them had a driver.

The cars were competing in the Indy Autonomous Challenge (IAC), the world’s first high-speed self-driving car race. The competition pitted nine teams from 21 universities around the world against one another. The teams started their designs with identical hardware, the Dallara AV-21 race car.

The vehicles’ sleek chassis made by Italian race car manufacturer Dallara look like those of typical Indy race cars. Inside, the steering, powertrains, and brake systems are also the same. But that’s where the similarities end. The IAC cars were retrofitted for automation with sensors—radar, cameras, and lidar—and programmable controls that run on powerful Intel® and NVIDIA® chips.

With no modifications allowed to the hardware, each car’s performance depended entirely on the algorithms that controlled it, maneuvering it safely as it flew around the 4 km (2.5 mile) oval track at breakneck speed. At the end of the day, the team that took the $1 million grand prize with the fastest two-lap average speed of 218 km/h (136 mph) was TUM Autonomous Motorsport, a team from Germany’s Technische Universität München. 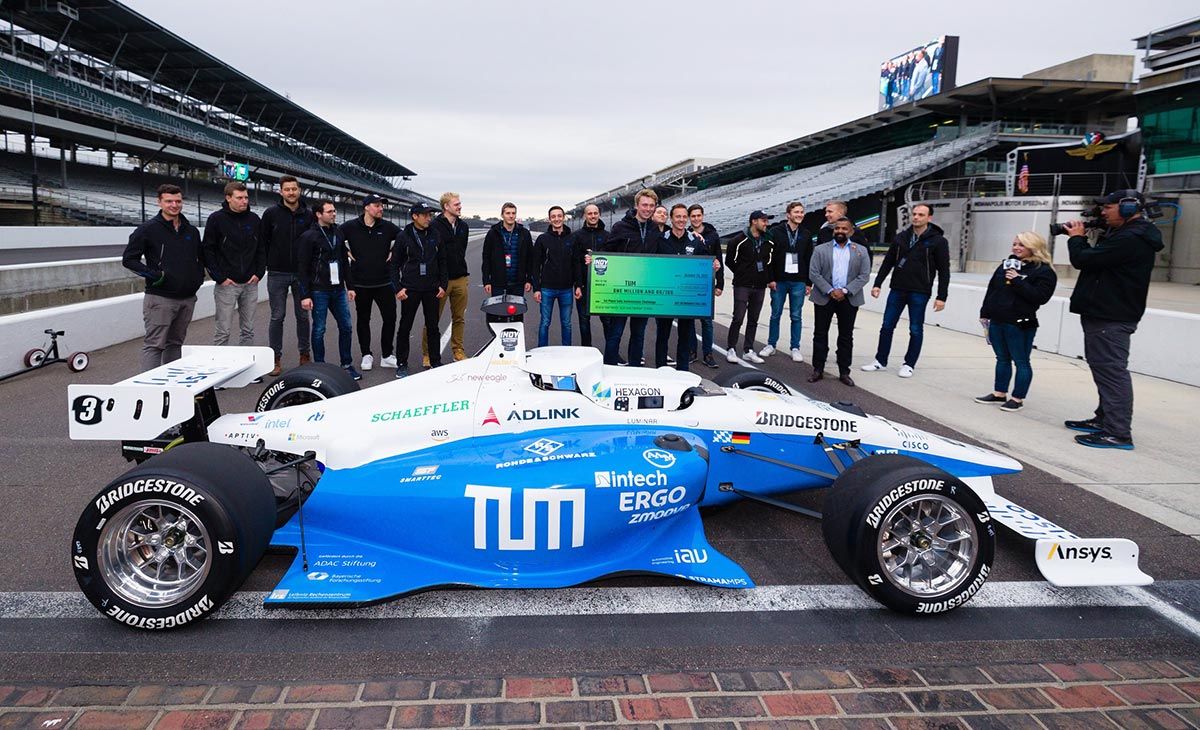 The team’s autonomous racing origin was in 2017, when it was founded by four Ph.D. students to participate in Roborace, a competition for student teams developing autonomous cars. TUM Autonomous Motorsport was one of two teams that helped Roborace test the competition format. By the time they signed up for the IAC in early 2020, the TUM team had grown to 15 Ph.D. students and 40 undergraduates.

For both Roborace and the IAC, TUM teamed up with Speedgoat®, which develops state-of-the-art systems for real-time testing designed to work in close concert with MATLAB® and Simulink®. Using Simulink with Speedgoat’s real-time hardware to design and simulate their vehicle’s control system meant that the TUM team could fine-tune the control software flawlessly before deploying it on the car.

“It allows us to challenge our software in the most demanding scenarios, from single-vehicle qualifying laps with high-fidelity vehicle dynamic models to multi-vehicle scenarios with up to eight autonomous racecars,” says Alexander Wischnewski, Ph.D. candidate and team leader of TUM Autonomous Motorsport. “The software is deployed on the autonomous race vehicle using automated code generation technology and the possibility to integrate easily with third-party software libraries.”

No Room for Error

Motor sports have historically been a showcase for cutting-edge automotive technology. The IAC is no exception. The race’s organizers seek to advance the safety of self-driving vehicles at high speeds via technology developed for the racing events.

Autonomous driving comes down to four parts, Wischnewski says. The first is to use the car’s cameras and sensors to detect objects and perceive the surrounding environment, “seeing where the other cars are on the track and the track boundaries.” Next is prediction—what nearby cars are going to do. Then, the car uses the perception and prediction data to plan its own action. The fourth part is motion control: transferring the action plan to specific brake, throttle, and steering commands.

“You have no room for error. One of the hardest challenges is getting the validation part right. You have to simulate thousands of hours of driving, so when you make a software change, you can test it very thoroughly before you add it to the car.”

Designing those four components for driverless cars that run on roads versus on racetracks brings different challenges. The Indy Autonomous cars, for instance, don’t have to worry about pedestrians and traffic lights, but they have to safely navigate hard turns and avoid other race cars while going at 240 km/h. Ensuring that safety meant countless painstaking hours of simulations.

“You have no room for error,” Wischnewski says. “You can’t have a single failure because that’s going to be catastrophic to your car. One of the hardest challenges is getting the validation part right. You have to simulate thousands of hours of driving, so when you make a software change, you can test it very thoroughly before you add it to the car.”

The competition started months before the cars rolled out to the Indianapolis Speedway for track practice. The teams had to benchmark their autonomous racing software in simulation races with increasing difficulty levels, from performing fast laps on their own to the final simulation race where up to eight vehicles competed against one another in multiple heats. 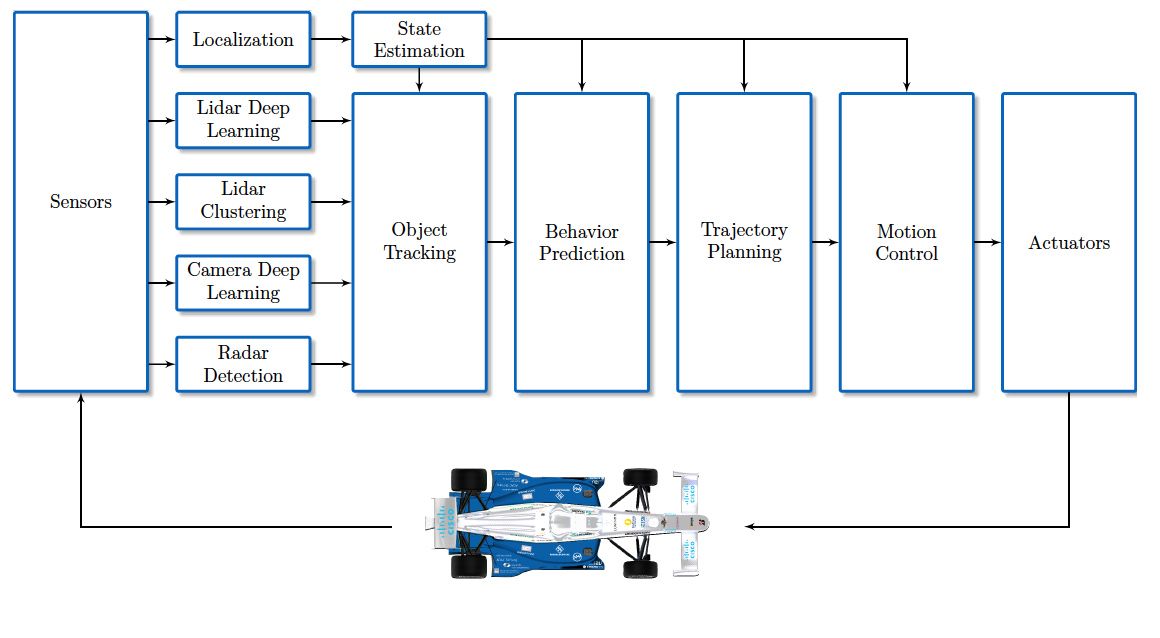 The TUM team used Simulink to design their motion control software and used Simulink’s code generation capabilities to generate C++ code. Then came the critical phase of testing and validating the software in a simulator. For that, they leveraged the vehicle- and environment-modeling capabilities of Simulink, letting them precisely model their own race car and that of eight competitors in a realistic virtual environment.

To test how their control software works in real time, the team built a hardware-in-the-loop (HIL) simulator setup that tied together the vehicle and racetrack environment simulator with the car’s control computer.

Vehicle Dynamics Blockset™ helped them develop the cars’ physics and motion models, which they deployed on a Speedgoat Performance machine using the Simulink Real-Time™ toolchain.

“The TUM IAC team chose a holistic approach to vehicle dynamics modeling. They have modeled every aspect of the vehicle in action, including the powertrain, suspension, tires, and so on,” says Christoph Hahn, head of technical marketing at Speedgoat.

Speedgoat’s tight integration with Simulink made the simulations as close to the real thing as possible. “The day MathWorks has a new release, Speedgoat launches a new blockset to ensure that all of Speedgoat’s hardware remains supported. Plus, the range of I/O modules that Speedgoat provides is huge. Almost all protocols, connectors, and plugs from various industries are supported.”

Running digital twins of multiple vehicles on the powerful target hardware gave the team a true-to-life feel for how the cars behave in different racing scenarios. They could then modify the control software based on that understanding, so that transitioning from the development environment to the real vehicle on the racetrack would be smooth.

“The real-time HIL simulation we built with Speedgoat hardware is one of the key factors to our success,” says Wischnewski. “It also distinguishes our approach from many others who do not rely on real-time multi-vehicle simulation.”

From Simulations to Reality

Real-world tests began in June 2021, when TUM got access to the real Dallara AV-21 vehicles to test their software. The German team used the open-source Docker® platform to connect the C++ code generated by Simulink to deploy their applications on the cars’ computers.

The team’s winning edge came from thoroughly challenging themselves during the simulation stage.

These efforts paid off at the IAC. While the IAC aims to be the first multi-vehicle wheel-to-wheel robocar race in the world, the event was more of a speed and safety competition: cars drove around the oval one at a time.

Cars had to leave the pit lane, complete a warmup lap, two timed laps, and a cooldown lap; the last one involved skirting around inflatable barriers. Only four teams were able to get through the timed runs. The fastest speed of 252 km/h (157 mph) came from PoliMOVE—a team from the University of Alabama and Politecnico di Milano—in the warmup round, but their car crashed into a wall turning into the second lap.

TUM Autonomous Motorsport’s consistent performance gave them the highest average speed over two laps, securing first place. On January 7, they went on to excel at the second round of the IAC in Las Vegas, which had two cars at a time going head-to-head in an elimination race.

The finals came down to TUM and PoliMOVE again in a neck-to-neck race with the cars clocking in at over 260 km/h. A slight control error made the TUM car spin out onto the grass at the end of turn four, and they came in second. But the algorithms helped the car control its spin and safely come to a stop.

Just three days earlier, TUM had announced the launch of driveblocks, a spinoff company that will develop a safe and scalable platform for fully autonomous vehicles. Its first target will be commercial vehicles in order to enable safe and reliable autonomous freight delivery.

As the company’s co-founder and chief technology officer, Wischnewski can now continue to follow his passion for bringing self-driving vehicles to the real world even as he wraps up his Ph.D. With the experience gained through autonomous racing, he now plans to make the company’s vision a reality.

Seeing the Road Ahead