Tornadoes can reach wind speeds of 200 to 300 mph—almost twice the speed of a category 5 hurricane—and yet there are scarcely any building codes or design standards for tornadoes in the United States. One reason is the comparative rarity of these events: they occur too infrequently to be observable during the lifetime of a typical structure. The current practice is to equip high-occupancy building structures in tornado-prone areas with specialized shelters to protect the residents. It is almost impossible to install scientific instruments to gather real-time wind flow information on tornadoes. As a result, modeling or predicting their destructive potential is extremely challenging.

My former Ph.D. student Viet Le and I have developed a solution that uses performance-based engineering (PBE), a methodology for evaluating a structure’s probabilistic responses to human-caused or environmental hazards. While PBE has been adapted in recent years for wind engineering, most projects have focused on large-scale, stationary wind phenomena such as hurricanes or windstorms generated by extra-tropical depressions. Few investigations have been conducted for PBE with regard to tornadoes.

Our performance-based tornado engineering (PBTE) application, PBTE_ANN, uses a surrogate modeling approach in which prediction with a trained artificial neural network (ANN) replaces a lengthier numeric simulation based on physical modeling. PBTE_ANN provides a way to account for the uncertainty of tornadic wind loads while enabling researchers to assess the probability of structural failure and perform life-cycle cost analysis (LCCA) of structures built in tornado-prone regions.

Built in MATLAB® with Deep Learning Toolbox™, our PBTE_ANN application expedites the thousands of Monte Carlo simulations of structural response to tornadic wind loads needed for a PBTE assessment (Figure 1). PBTE_ANN allowed us to complete structural analyses that previously took hours in a matter of minutes. 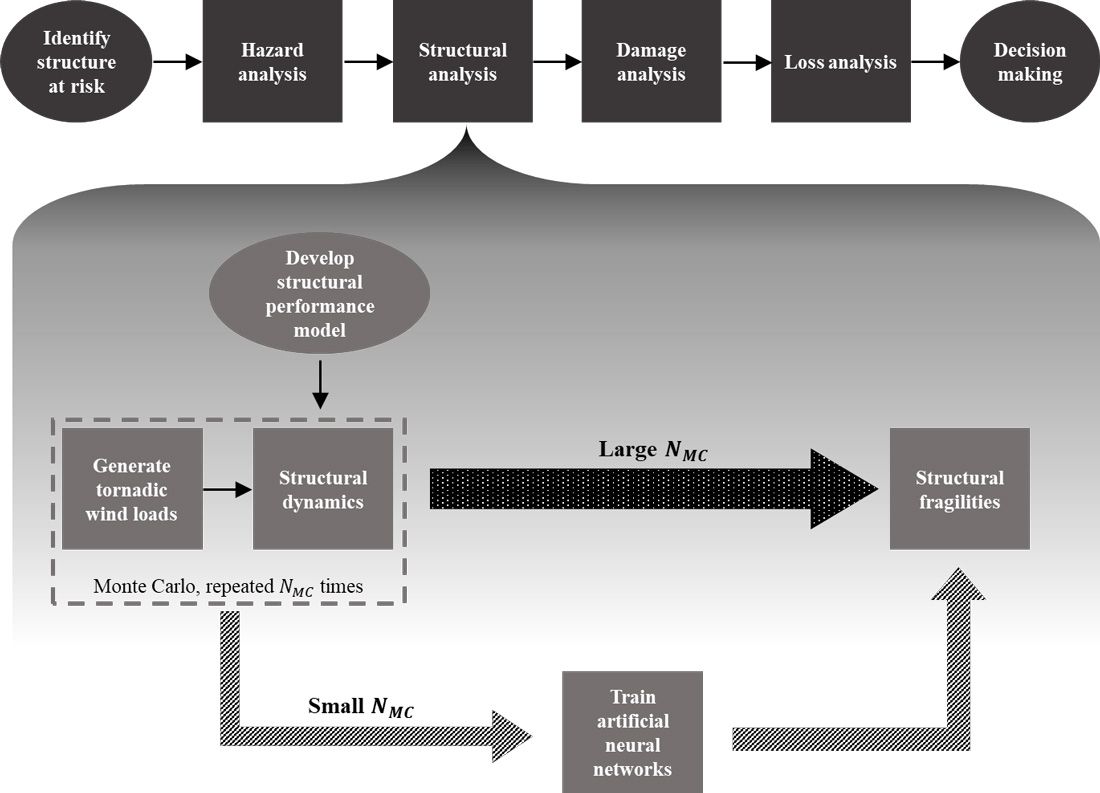 MATLAB enabled us to build the first version of the application, incorporating an easy-to-use interface and a surrogate model ANN, despite having little prior experience in deep learning or user interface design.

At the core of PBTE_ANN is an algorithm that simulates a tornadic wind load applied to a vertical structure. In the initial version of the application, the structure resembles a monopole tower, akin to a rectangular signboard mounted on a vertical mast (Figure 2). We generate the tornadic wind loads in MATLAB using multiple numerical models based on fluid dynamics theory1. Input parameters can include the radial size of the tornado and its maximum tangential velocity, as well as the signboard area, height, and mass and the flexural rigidity of the support structure. 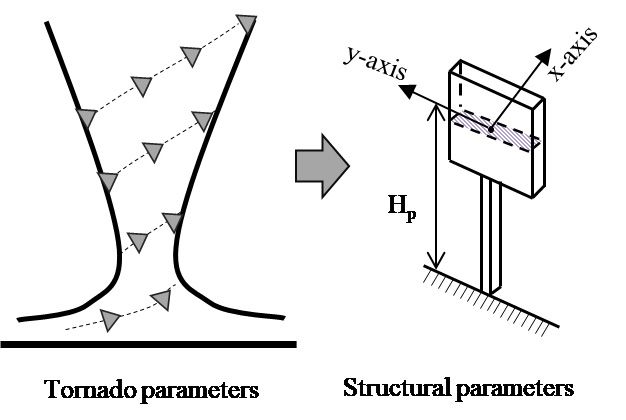 Figure 2. Schematics of the tornado core and monopole tower structure.

The algorithm applies the generated wind loads to the structural model and calculates the structure’s dynamic response. If the peak displacement of the structure exceeds a set of predefined thresholds, the algorithm concludes that the structure has been damaged, overturned, or destroyed by the tornado.

In a standard PBTE assessment, simulations are repeated across a range of tornado sizes and intensities. The results are used to create a fragility surface, a visualization that describes the probability that the target structure has been destroyed (Figure 3). 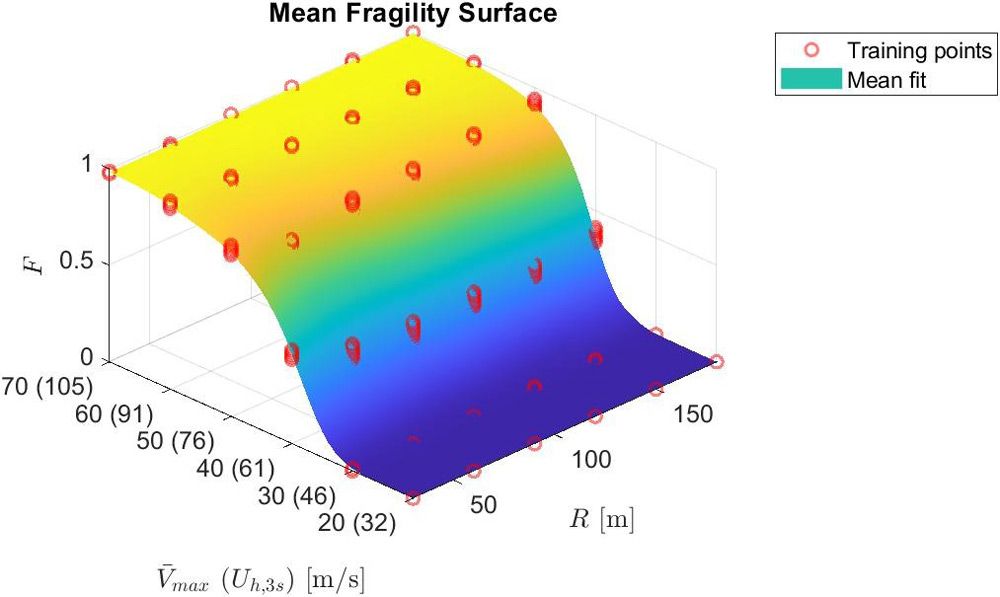 Designing and Training a Surrogate Model

To reduce the computational demands of this process, we use a surrogate model: an ANN designed and trained with Deep Learning Toolbox. To generate training data for the ANN, we perform simulations on a representative sample of tornado sizes and velocities. For example, we might run simulations for six different tornado radii ranging from 30 meters to 180 meters at six maximum different tangential velocities ranging from 20 m/s to 70 m/s for a total of 36 simulations. We reduce simulation time by running the simulations on multiple cores concurrently with Parallel Computing Toolbox™. At the end of each simulation, the structure is determined to be either intact or permanently damaged. We use these results to train the ANN.

We experimented with several ANN architectures before selecting a “shallow” network that has two input neurons (one for tornado intensity and one for size), one hidden layer with four hidden neurons, and one output layer for the approximated fragility or failure probability. We found that networks with additional neurons and hidden layers tended to overfit, producing unrealistic fragility surfaces with localized, inconsistent fluctuations. Simpler ANNs produce smooth, monotonic surfaces, which are more compatible with the physical phenomenon. The user can, however, select a different ANN architecture using the online algorithm and examine its effects on the simulation results.

By running predictions using the trained ANN, we cut the computational workload needed to complete the Monte Carlo simulations for the full fragility surface by about 80%.

We created the PBTE_ANN application so that our PBTE framework could be used by other researchers. We developed a graphical interface that guides the user through the PBTE workflow, and packaged the interface, the tornado and structural models, and the ANN into a standalone executable.

In the first step of the PBTE_ANN workflow, the researcher sets the parameters used in the PBTE analysis, including the upper and lower bounds of the tornado size and wind speed, as well as the size and main properties of the tower structure (Figure 4). 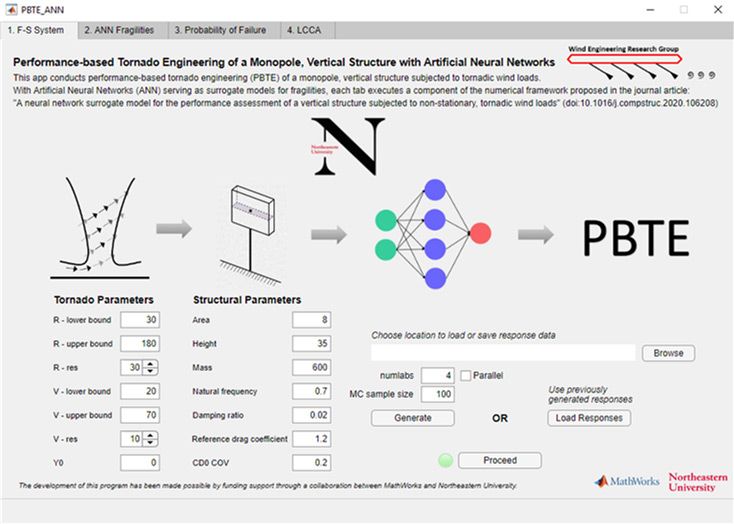 Figure 4. The first screen of the PBTE_ANN application, used to define input parameters for the simulation.

Next, the researcher trains the ANN. PBTE_ANN uses the trained network to generate and display the fragility surface (Figure 5). 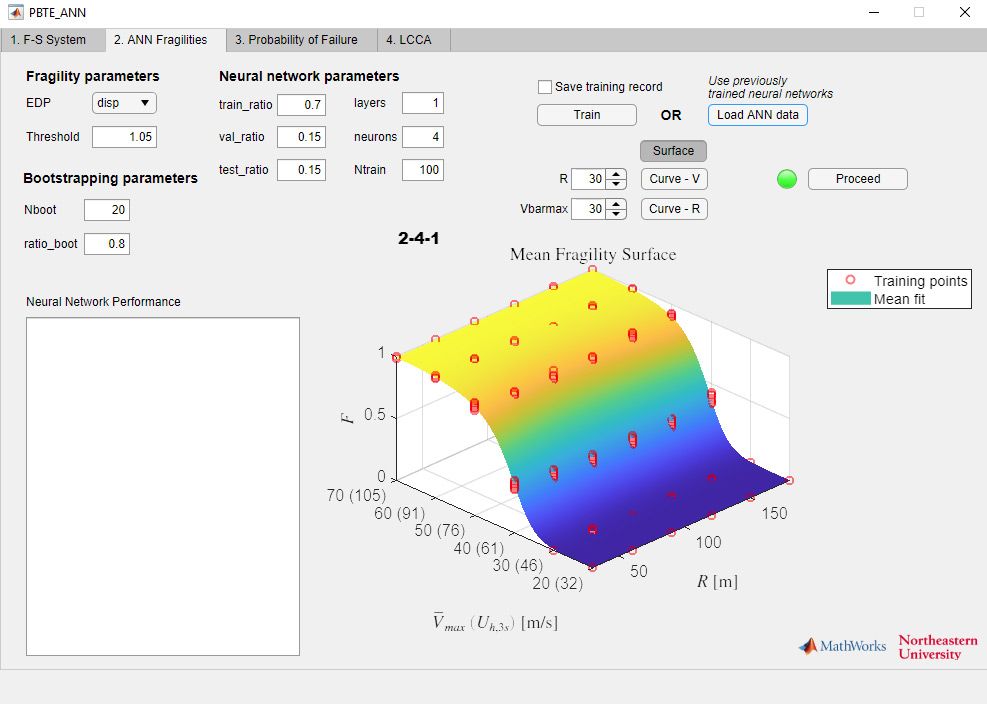 On the third and fourth screens, the researcher views the probability of failure (that is, the likelihood that the structure’s response to the tornadic wind loads will exceed a specified design threshold) and the results of the life-cycle cost analysis (LCCA), respectively (Figure 6). The failure probabilities also include information on the tornado climatology specific to the various US states. 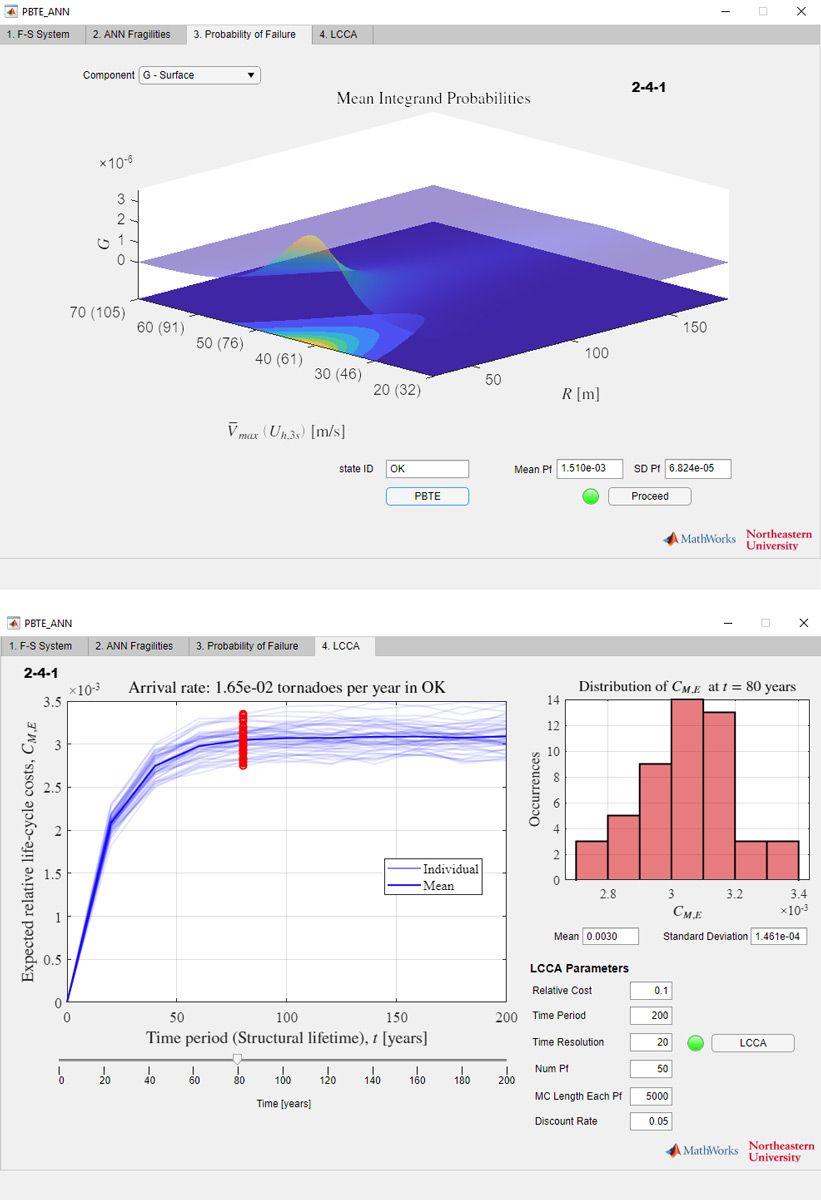 We recently made PBTE_ANN available to other researchers via DesignSafe-CI Data Depot, which is part of the Natural Hazards Engineering Research Infrastructure (NHERI) funded by the National Science Foundation. Any researcher who is interested can download and use the application, without needing MATLAB to run it. Documentation is also available to guide the user through the simulations.

Enhancements planned for future versions include more accurate wind field models as well as more complex structural models, such as tall buildings that can simulate torsion and similar effects. Meanwhile, we have started applying MATLAB based ANNs to other wind engineering problems, including the study of catastrophic failures of long-span bridges.

This work was done in collaboration with Dr. Viet Le, a former Ph.D. student at Northeastern University, currently a research engineer at Arup in New York City.

1 The online version of the software restricts the generation to one tornado.