"Using MathWorks tools, we identified the best algorithm choice. Because the model ran much faster than our circuit simulator, we caught implementation errors much quicker and shortened our time to market." 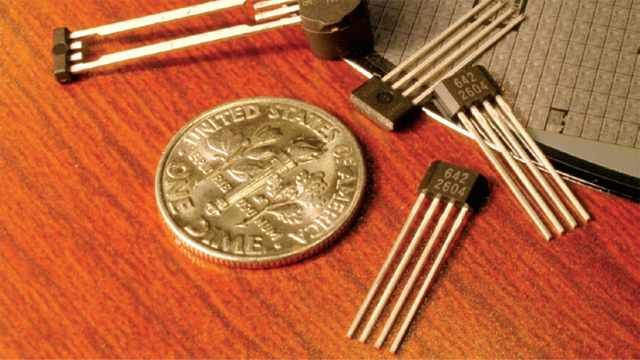 Allegro MicroSystems, the world leader in Hall-effect sensors, develops silicon-based products for automotive electronics applications, such as cam, crank, transmission, and wheel speed sensing. Allegro’s highly accurate sensors use a magnetic signal as input. When the devices sense a mechanical target, such as a gear tooth, they produce an electrical signal that provides position data to an automobile's engine control unit (ECU) or anti-lock braking system (ABS).

To ensure the magnetic sensors are accurate and reliable, Allegro engineers needed to simulate all possible driving scenarios, such as driving over pot holes, navigating sharp corners, and reacting to ferrous materials flying in front of the sensor.

Allegro’s engineering team compared MathWorks tools with a schematic simulated in their IC design environment. They evaluated ease of use, model development time, simulation time, and how well the simulation results matched the behavior of the actual part. They also considered cost and flexibility in tool deployment.

Based on their findings, Allegro selected Simulink® and Simscape Electrical™ to design and validate system models.

"The graphical environment of Simulink is well-suited to the needs of Allegro engineers who work extensively with schematics and other graphical representations," says Voisine.

Using Simulink, design engineers develop and simulate device algorithms before realizing the IC at the transistor level. Later, they compare simulations between Simulink and their IC design tool to validate their models before implementation. Allegro engineers also model existing sensors and compare the simulations with sensors in development to validate performance. These models enable systems engineers to help their customers design systems with Allegro sensors.

Simscape Electrical enables them to model resistors, capacitors, inductors, and other components of the sensor system. The models incorporate current and voltage information, which is converted into Simulink signals for further mathematical and logic modeling.

Allegro builds models using electronic components from Simscape Electrical as well as models that use Simulink logic blocks. "By combining the electronic and logic domains, we can build a good mixed-mode analog and digital simulator,” explains Voisine. "We solidify the chip architecture by simulating and developing our behavioral models with Simulink before implementing the transistor-level models with our IC design tool."

During the initial design phase, designers simulate basic inputs to devices such as sine, triangle, and square waves. Systems engineers continue to leverage Simulink models when using their laboratory mapping station to compare actual magnetic waveforms with real-world targets. This enables them to account for real-world target design considerations when evaluating new algorithms.

Allegro’s Simulink models enable them to present more accurate data on sensor performance in response to customer queries. Product engineers can use the same models to predict how the sensors respond under different test conditions.

In just six months, three Allegro engineers modeled eight sensors using MathWorks tools. "Moving from MATLAB to Simulink is a paradigm shift, which took us a couple of weeks. However, now that we have made that shift, it is much easier to modify Simulink models than to rework textual code," notes Voisine. "Reusing Simulink models saves us months of development time for future sensor designs."

After receiving positive initial evaluations on their next-generation ABS sensor, the company is now fully qualifying the sensor.