Use MathWorks tools to improve the pump’s pressure sensing technology

“MathWorks tools enabled us to understand the system-level interactions among the components, to model the physics, and to determine safety limits of the pump very efficiently and quickly.” 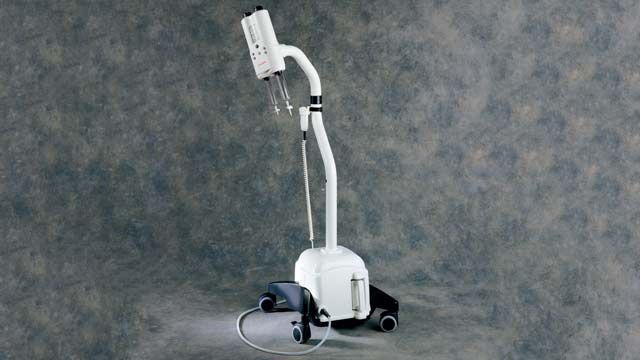 Vascular injection pumps developed by Medrad (now part of Bayer HealthCare) enable physicians to quickly detect arterial blockages, illuminate single blood vessels, and gauge the health of a beating heart using radiological or magnetic resonance (MR) imaging. The Medrad Spectris Solaris pump automatically injects contrast agents and saline solution into patients during MR imaging at flow rates up to 10 ml/sec and under pressures up to 325 psi. A precise amount must be injected to ensure patient safety and high image quality.

To predict the pump’s pressure safety point accurately, Medrad needed to improve the technology used to measure the pressure of the fluid delivered to the patient. Instead of relying on motor current as an indicator of fluid pressure, strain gauges would be used to improve pressure monitoring. In addition, because digital signal processors (DSPs) would be used as motor controllers, the effects of fixed-point mathematics for computing motor control signals would need to be evaluated.

To ensure safety and optimal performance, Medrad needed a complete understanding of how the pump’s pressure measurement system responded and functioned with other system components and the DSP motor controllers.

“We needed to understand how the different subsystems affected the fluid dynamics and the pressure generation of the unit,” says Kalafut.

Medrad also sought to augment and streamline the hardware testing required for FDA approval by using mathematical modeling and simulation.

Finally, Medrad engineers were required to reduce design times so that they could respond more quickly to competitive challenges.

“Model-Based Design enabled us to mathematically model each subsystem,” says Kalafut. “We are now able to understand the system behavior and determine how quickly pressure builds in the pump.”

“With Simulink, you can demonstrate your system or subsystem model so that others can see and understand the relationships among the components,” says Kalafut.

“We made the original simple average filter more sophisticated using DSP System Toolbox and Signal Processing Toolbox, and shaved three weeks off the project in the process,” says Kalafut.

Another team responsible for a new cardiovascular injection system was able to define various system requirements using an existing Simulink model. “That’s where Model-Based Design and Simulink have many advantages over C and Fortran,” says Kalafut.