Use MATLAB and Simulink to develop an integrated environment for simulating, visualizing, and optimizing designs using a reconfigurable robot

“With MATLAB and Simulink we developed a low-cost design and simulation environment that enables students to apply theoretical aspects of kinematics, dynamics, and controls of robot manipulators in a realistic way, optimize their designs, and see those designs in action.” 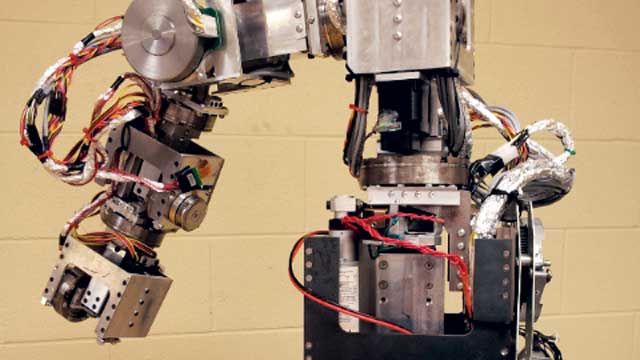 Because of budget constraints, most university robotics labs can provide at best one type of basic robot. As a result, students have little hands-on experience in the design of robots and their control systems, and very limited access to robot manipulators commonly used in industry.

To address these limitations, the University of Toronto Institute for Aerospace Studies developed a reconfigurable robot manipulator and an Integrated Design and Simulation Environment (IDSE). Built using MATLAB® and Simulink®, the robot and IDSE enable students to design, simulate, optimize, and operate most configurations of robot manipulators used in industry today.

“With Simulink and Simulink 3D Animation, students can visualize a realistic simulation of the robot,” says Dr. Reza Emami, senior lecturer at the University of Toronto Institute for Aerospace Studies. “Using the IDSE, the students can identify the best configuration of kinematic, dynamic, and control parameters for a given task before testing their design on an actual robot manipulator.” 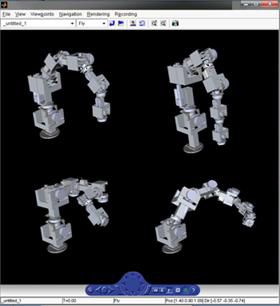 When Dr. Emami began teaching the new robotics course at University of Toronto, the lab had no robots. The students used rudimentary simulations, until the course obtained access to a few tabletop robots. These were too simple to enable Dr. Emami to demonstrate all aspects of industrial robotics, but purchasing a variety of robots, and enough of each type for all the students in this popular course, would have been prohibitively expensive. Dr. Emami’s primary goal was to develop a reconfigurable robot manipulator that would engage students in designing not only control systems but also the robots themselves. He also wanted to ensure that the design environment was easy to use and accessible remotely. “We needed students to be able to use the IDSE with minimal training to design robots, optimize control parameters, and see their designs working in the lab,” he explains.

Dr. Emami and his team of students and engineers used MATLAB and Simulink to model the reconfigurable robot and to build the IDSE.

They generated a Simulink and Simscape Multibody™ model of the robot by importing an XML representation of its CAD assembly using Simscape Multibody Link, and then added blocks for the actuators and other electronic components from Simscape Electrical™. They modeled the driver circuits for motors and solenoids using Simscape Electrical™ transistor blocks. They used Simscape™ to integrate the mechanical and electrical subsystems in the model.

Using Simulink 3D Animation™, the group created an animated 3D representation from the model that enables students to visualize the robot in a virtual reality environment.

Working in MATLAB and Simulink, Dr. Emami and his colleagues developed the IDSE user interface and additional modules that the students need to complete course assignments.

The optimization module, implemented with Simulink Control Design™ and Simulink Design Optimization™, enables students to configure the robot for a specific trajectory or task by identifying an optimal set of dynamic, kinematic, and control parameters.

For course assignments, students use MATLAB and Control System Toolbox™ to create plots and visualize system behavior in the time and frequency domains, as well as to calculate proportional, derivative, and integral gains for each joint in a selected configuration.

The students use the IDSE to complete their design, simulation, and optimization exercises and to visualize the 3D animation of the robot. Ultimately, once they have verified their design through simulations, the students will test them on the actual robot.

University of Toronto is among the 1300 universities worldwide that provide campus-wide access to MATLAB and Simulink. With the Campus-Wide License, researchers, faculty, and students have access to a common configuration of products, at the latest release level, for use anywhere—in the classroom, at home, in the lab or in the field.

Learn more about University of Toronto Institute for Aerospace Studies