B on 11 Apr 2022
⋮
Commented: B on 22 Apr 2022
Hi ,
So I have these two shape files and wanted to plot both together using matlab mapping toolbox functions but the units of the coordinates are different so they are not plotting on each other. I tried some other functions but nothing is working.
Here are my simplest trial:
M0 = shaperead('M0PolygonLayer.shp');
land = shaperead('Canada Background.shp');
figure
hold on
mapshow(land,'FaceColor', [0.9 0.9 0.9]);
mapshow(M0,'FaceColor', [0.9 0.9 0.9], 'Linewidth',2);
%figure on left 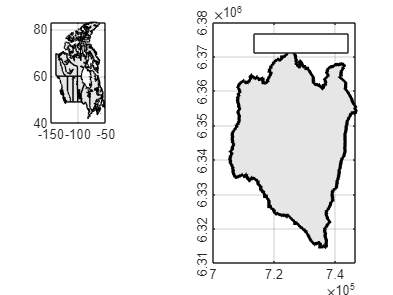 I tried deg = km2deg(km) to convert MO X and Y to deg but that did not work.
please help me.
Thank you.
KB

Walter Roberson on 11 Apr 2022
⋮
You should be passing referencing information to mapshow()
https://www.mathworks.com/help/map/georeferenced-raster-data.html

⋮
Hi Walter, Sorry I do not understand. Both of these files are shape files not raster as your referal suggsts. I should be grateful if you can throw more light on this for me.
Thank you and I really appreciate your direction.
KB

⋮
Thanks Walter, I really appreciate this. Both shape files were obtained from the same country. The first one is the country map (canada) as you can see in the left Figure with degree coordinates. The second on the right is also basin in Canada but the coordinates as displayed by mapshow() points to a distance coordinates (*10^6 and *10^5) rather usual coordinates in degree decimals as in the first figure). It was fir that reason I was using the km2deg but it only gave me an Y,which closely resembled the coordinates of Y in the first figure (Canada) but the X was short. I hope you can see what I meant in the subplots?

⋮
So I would sa, yes both coordinates have been specified as display on the plots. Interesting, when u tried to plot both in arcgismap it plotted on it but I can't use those plots because I need to add other plots, which can only done using matlab if I can get my maps sorted here.

⋮
Although I am from Canada, unfortunately I do not recognize the shape being contained by M0PolygonLayer.shp . It is not Canada as a whole; it is not any of the provinces. My guess from the shape is that it is one of the lakes, but not any of the largest lakes.
Because I do not recognize which part of Canada it is intended to be in from the shape, I am unable to guess what coordinate system is being used.
I can speculate that maybe 6.35*10^6 might maybe refer to 63.5N . If I scan along that latitude in Canada, I do not see any good matches.. but maybe it is left/right flipped of one of the lakes in North West Territory, such as near 118W ???
As you do not appear to have any information about where in Canada the M0 is located, then as outside observers, we have to assume that the M0 shape might be outlining a underground geological feature, such as the suspected boundaries of a mineral deposit. There is no way for us as outside observers to be able to place that on the map of Canada.
How do you know that the M0 shape is contained within Canada? Is there information inside the shp file that tells you that? Is there a documentation page where you obtained the shp file that might happen to have a clue about which part of Canada it is?

⋮
Hi Walter, Thanks for the concern. I am happy to inform you that I have been able to resolve the problem using projcrs,projin, projfwd and geoplot functions. I really appreciate your response.
KB