How to detect cluster of radial lines which are generated from same point ?

⋮
Hi John,
Thank you For you answer. In the example shown only a poor cluster with less then 50 traces, in the original authentic pics there are more then 500 traces. I’m assuming the way you’ve recommended to solve the problem will be a bit heavy for processing.
I’m trying to understand if there’s an option to define specific ROI with a filter for this kind of shape. What do you Think?
Have a great day 🙂

⋮
I think some problems are larger than others, and will require more CPU than others. But in fact, I recall that code to find lines in an image is not too difficult. Given each line, it is now trivial to compute the parameters of that line. (Be careful about the vertical lines!) So very little work there.
Finally, my idea was t ocompute the intersection points of pairs of lines. Even doing that for 500 lines, where you need to find the intersection now of 500*499 pairs of lines is still trivial for a computer. So I fail to see the problem. Just write the code efficiently. No, don't use the symbolic toolbox to find those intersection points. Good code would still be blazingly fast here.

Image Analyst on 5 Dec 2022
⋮
Not sure what you want to find out since "detect" is so vague and unspecific. Please be specific. Like do you want a length distribution, or the point where all the lines seem to emanate from? How many clusters per image are there? Always 2, one on the left half and one on the right half? Or can there be multiple clusters per image?
Have you tried thresholding and then calling regionprops?
In the meantime, see my Image Processing Tutorial in my File Exchange:
Image Analyst's File Exchange
If you have any more questions, then reply back with specific questions, description of what you want to measure, and 2 or 3 more images so we can see how the images vary. But do so after you read this:
TUTORIAL: How to ask a question (on Answers) and get a fast answer

⋮
Hi :-)
im new in matlab and i have a project which demands devloping a tool which detecting clusters of radial lines, in wide range of variations (amount of lines, thier density, thier length, the total cluster diameter).
I need to make classification of all the clusters in a given HD '.tif' image, and the main idea is to find if there are real clusters, and not detect what is not a cluster. See In figure '2.jpg', the left image showing a real cluster, and the right is just a dirt.
I've seen an article which showing that somone done the same thing in fiji program.
He did the following steps to classify each cluster:
what do you think? is it possible to make it in matlab app designer? i need to make the same progrm with improvments for the detecting accuracy.
Thank you very much!
Best regards,
Rami

⋮
@Image Analyst Hi :-) i will be thankful for your opinion about the demands. Im trying to use your example for a start, but im really cunfused :-(

⋮
There are several ways you can check the roundness of the blob, For example ask regionprops for the 'Circularity'. Some of the blobs are not clusters of lines but just a big blob with spiky protrusions out of the outer boundary. For those types of blobs, you might call bwboundaries and smooth the coordinates and then see how many coordinates stick out from the smoothed coordinate. Or maybe you can skeletonize the blob and count the leaf nodes with bwmorph(bw, 'endpoints').

⋮
ok, ill try that. Is it posible in the exmaple code you gave me to find the interception point of the lines by using 'regionprops' with 'centorind'?

⋮
I don't think the code applies anymore since you don't always have isolated lines. Sometimes you have spiky disks instead of a collection of well separated lines. 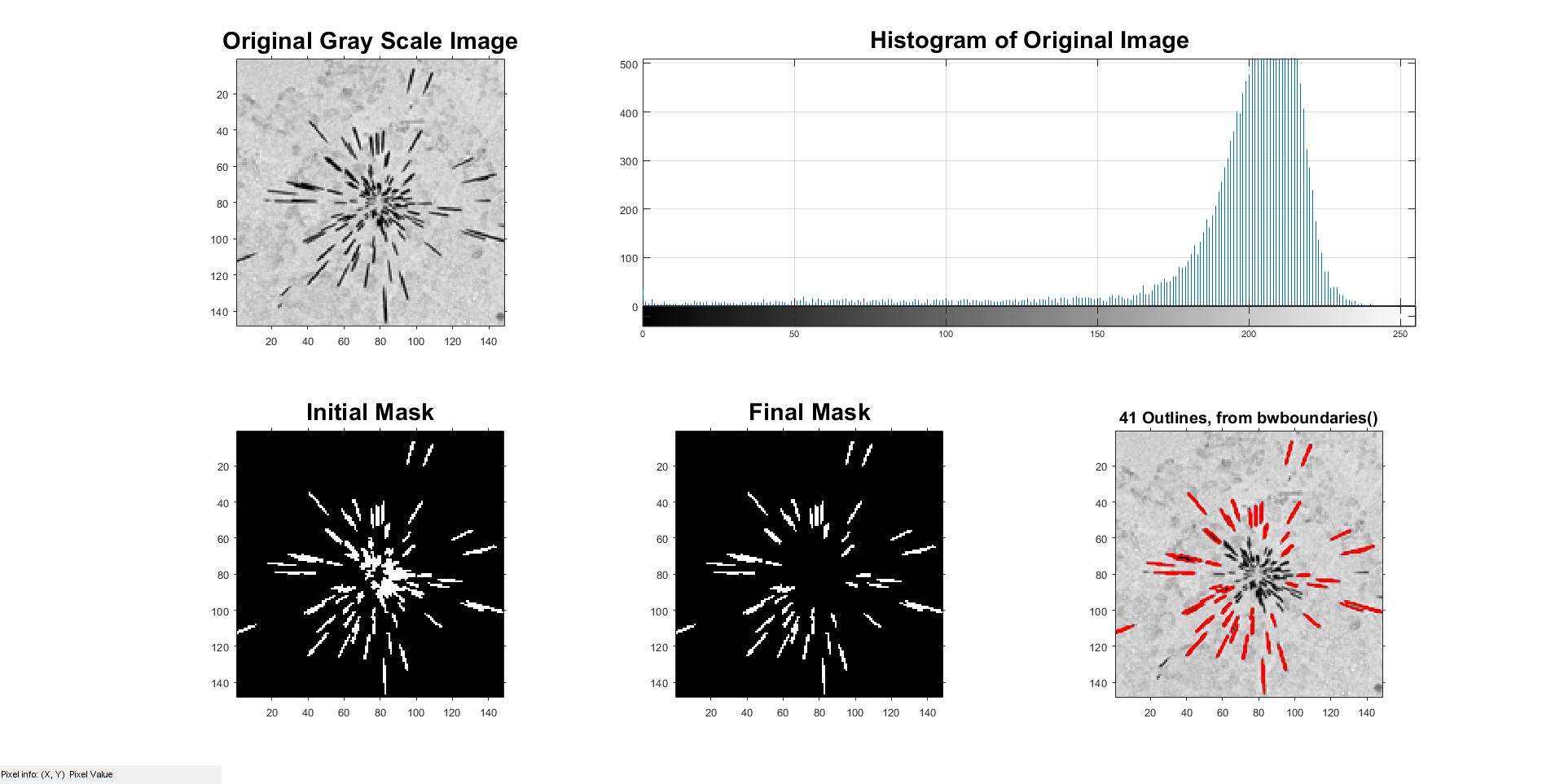 Rami Babayew on 11 Jan 2023 at 10:13
⋮
hi, can you help me to merge each cluster to 1 ROI?
i would like to crop every single ROI with cluster and analyze it specifically.
thanks, best regards
rami

⋮
You can use bwconvhull to get the convex hull of all the blobs and merge them into a single blob.