z8080 on 1 May 2019
⋮
Commented: dpb on 1 May 2019
Accepted Answer: dpb
I have an Excel spreadsheet whose rows I'd like to randomly shuffle and further use in Matlab. To that end, I'm reading the XLS into a cell array, generating random numbers into a column, then sorting by that column. This is proving to be problematic though, because of conflicting variable types. The code I used is:
[num, txt, M] = xlsread(fileName);
for row=2:row_N % generate random numbers in the D column
M(row,4) = num2cell(rand);
end
M = sortrows(M,4);
This leads to my matrix looking like this: 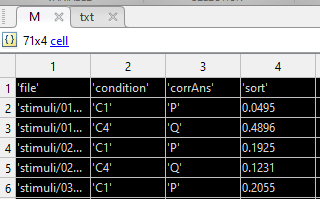 Because the D column contains numbers while there's text in the other columns, the sorting cannot be done (it says "Cell elements must be character arrays.").
I tried various conversions between numeric and cell variables, and also tried using 'readtable' instead of 'xlsread' - but there is always a problem, such that I cannot get this conflict solved.

⋮
Thanks! A minor correction that 'readvariablenames' needs to be followed by 'true' and not by '1'.

⋮
'1' is "True" -- unless TMW has broken backwards compatibility and now on a later release is actually type-checking??? Let's hope not; a LOT of code is going to break, including TMW's own...

⋮
I'd have thought 1 would work as well, but I got an error which went away when I replaced with true.. no matter, the solution proposed is very good, thanks again