Is there a way to add synchronize function to Matlab 2016a?

⋮
As you can see at the bottom of that page, that function was released in r2016b and cannot be imported in earlier releases. You'll have to write your own function or search for a pre-existing function. If your timetables have unique timestamps it could be as easy as vertically concatenating the tables and sorting the rows by the time column.

Steven Lord on 10 Jan 2020
⋮
As Adam Danz said, this function was released in release R2016b. It also only works on timetable arrays, not table arrays, as you can see from the description of the TT1 and TT2 input arguments. Compare this to a function like innerjoin, whose Tleft and Tright inputs can be either table or timetable arrays.
While you could theoretically write your own synchronize function like Adam suggested, a much easier alternative would be to upgrade to release R2016b or later if possible and then store your time-based data as a timetable (the timetable function was introduced in R2016b.)

⋮
Thanks Steven!
I think upgrading to R2016b or more would nice.
I have one questions though, since I have written quite a lot of code in R2016a, would my code still work on the updated versions of Matlab or it could cause erros when running my code on the more recent versions?
Also, is there a specific Matlab version that you recommed me to update to to avoid erros for example?
Thanks in advance :)

⋮
I would expect most code written with release R2016a to work in release R2016b. Exceptions would be if you wrote the code using functionality that had a backwards incompatible change in that release, most or all of which should be listed in the Release Notes (that's the Release Notes for MATLAB, if you're using other products you could review their Release Notes as well.)
That could include trying to do something that didn't work in the older release but now does work, like implicit expansion (which is listed as having a compatibility consideration in those Release Notes.)
[1 2] + [1; 2] % Fails in older releases, works in R2016b and later

⋮
If the users of your program(s) have access to the most recent release of matlab, I see no reason not to use the most recent release.
On the other hand, if you know that users are currently using an old release of Matlab and have no plans to update, you should either
The problem occurs when code written in a newer release uses a function or a feature that was recently introduced and then that program is run on an earlier release that doesn't have access to the function or feature.
For example, you can see when tiledlayout was introduced by scrolling to the bottom of the function's documentation. If this function is run on a release prior to r2019b, it will cuase an unfamiliar function or variable error. 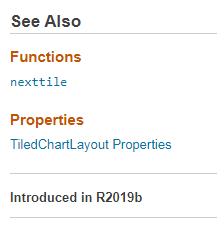 Lastly, at a more advanced level, you can detect the version number of the instance of Matlab running the code and use a conditional statement to handle actions taken for nearer and later releases. Demo:
% Return the matlab release number
vStrct = ver('Matlab');
vs = str2double(vStrct.Version);
% Detect if Matlab version is prior to r2016b
if vs < 9.1 || isnan(vs)
% Do something
else
% Do something
end