How can i speed up my code?

Here, Conso is a number, for example 50. ToutesPlages is a 1x80000 structure with the field MinConso and MaxConso and its length .

⋮
Benoit - you state that the above code is in a loop but where does it depend upon the loop index variable? Can the result of this code change on each iteration of the loop? If not, then perhaps it can be moved out of the loop. Else please provide more details.

⋮
Hi Geoff
Yes the code in in the loop where at each iteration, a different value of Conso is assigned. The code is in a fonction:

And i call the function in the loop where Conso change at each iteration.
Thank you for your answer

⋮
I don't really know what would be plausible contents of your struct, so testing code is a bit tricky. Can you either share your data or write code that would generate plausible random data? And can you please post your code as text instead of an image?
I would suspect the concatenation into arrays takes a lot of time to repeat. It may be more efficient to create the MinConso and MaxConso arrays outside of the loop and pass them as variables. 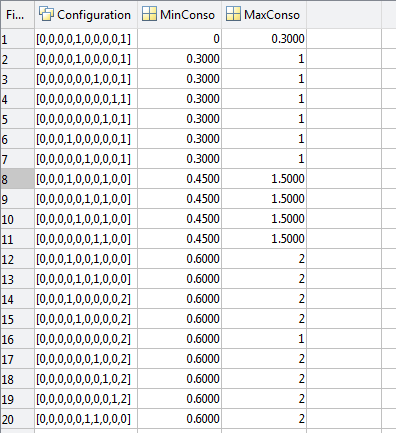 ⋮
The indexing operaton appears optimal in isolation; still nothing in code snippet as shown that indicates it needs to be in the loop, however.
But, presuming avoid executing the same code multiple times with the same data, unless can somehow create the data in the array to include only the wanted at that time so don't have to then discard the unwanted, don't see much else to be done here.
That shouldn't be a major bottleneck operation, anyway, wouldn't think unless using the struct array is causing a lot of overhead in addressing behind the scenes.
As always, don't try to peephole optimize; if code performance isn't acceptable, profile the whole thing first so know are working on what is the actual problem area.

⋮
Thank you for your answer. I don't think i can put the code outside the loop because i need for every value of Conso ( which is different each time) the structure ConfigurationsPossibles and then to do some operations with it. This indexing seems to be the fasted method that i can do to get the wanted element of a given structure.
I have done a profile of the whole code but this fonction is what takes the most time. So i tried to improve this.

Matt J on 26 Mar 2020
⋮
Edited: Matt J on 26 Mar 2020
Please do not provide code in the form of embedded images. It prevents us from conveniently copy/pasting relevant sections.
In any case, the concatenations [ToutesPlages.MinConso] and [ToutesPlages.MaxConso] are expensive operations, unnecessarily repeated throughout the loop. Since they are not changing, you should create dedicated arrays for them prior to the loop.
LowerBounds=[ToutesPlages.MinConso];
UpperBounds=[ToutesPlages.MaxConso];
for i=1:N
Conso=...
ConfigurationsPossibles=ToutesPlages( LowerBounds<Conso & Conso<UpperBounds);
end

⋮
Works very good. Thank you so much!