From the series: How to Develop DC-DC Converter Control in Simulink

Learn how to use Simscape Electrical™ functions to generate maps of heat losses that you can embed in a dedicated model for fast simulations of thermal behavior and sizing of cooling systems. See an example using a SEPIC modeled in Simscape Electrical with components such as a voltage source, resistor, inductor, and capacitor. In the first phase of design exploration, engineers are interested in efficiency and conversion losses to better understand the system architecture and other requirements, such as the type of sensors needed or the sizing of the cooling system.

For this reason, engineers use and parameterize high fidelity MOSFET and diode model blocks by following the manufacturer datasheet. Use additional MATLAB® functions included in Simscape Electrical to retrieve the heat generation of the switching devices in various operating points. Use Parallel Computing Toolbox™ to reduce the computational time spent creating the heat map by distributing independent simulations on multiple cores. Use the resulting heat map as part of a fast simulation model to design the cooling system, where you can simulate hours of thermal behavior in just a few seconds.

The diode is a bit more difficult. We can see that actually, the power losses are very much dependent on the current, and not so much of the voltage.

We can re-use these tables in software for in a specific model build-up for thermal stimulation. You can see here I feed my voltage and current as a desired operating region, I am recalculating the power losses using a lookup table, and I am feeding them in a physical network which replicates my passive cooling system-- my heat flow, the watt generated by the MOSFET. I have some thermal masses due to the mass of the junction. I have a connection to the case-- the case as well as some thermal mass, which has a connection to the heat sink. My passive heat sink then has her convection with the ambient temperature.

There is no active cooling. This is simply a passive system based on the ambient temperature. I can quickly change to my operating region, like around 18 volt and 1 ampere, and then I can simulate for up to an entire day. We can see it 3,600 second for 24 hours.

I can run-- the simulation will be instantaneous. This is a very simple model. But this can be incredibly powerful technique for the engineers which are creating or assessing or sizing the cooling system for your power converter. We can see that our expected operating region-- we actually are going to be around 318 Kelvin of temperature for the MOSFET and 328 Kelvin for the diode, which is acceptable. It's more or less 47 degrees. So of course, it's the entire day, with a lot of current. But it doesn't heat up too much, so we may be fine with a passive cooling system.

I used a new probe block to get the temperature. You can use it for any kind of physical system. You double-click, you pick a block, and then you get access to all the variables that are inserted in this block. So this is a very convenient technique that allow you to build up a network and avoiding to instrument everything with sensor. This has been introduced in release 2020a.

Now, of course, if the passive cooling is not enough, your colleagues which are working on the cooling system may need to search for a fan to start blowing air actively on the heat sink. Maybe you need some heat exchanger as well.

So we provide a lot of these blocks that allow your team to work truly on the entire engineering aspect-- not only on the power electronics, but on the cooling-- sizing the cooling, and the cooling control. So this is what we think when we say that we provide truly a multi-domain simulation environment for a multidisciplinary team to work on.

So as a recap, we saw how you can use the function getpowerlossSummary to create your table of power losses from MOSFET and diode. You can create a very fast implementation of your cooling system using simply the power losses at different operating point. We have an example for this called Switching Power Supply Thermal, if you want to take a look at it.

And we actually have a new function as well to hide this fidelity of your switching devices. We added MOSFET, and we parameterized the MOSFET based on the data sheet. But more and more, you can import existing models that you may have in SPICE directly into Simscape using the function subcircuit2ssc. This will, from a netlist, automatically create a Simscape component based on the SPICE netlist.

We pushed this that right now, we introduced SPICE models for our switches such as the SPICE-imported MOSFET, and we provide some selection off-the-shelf for certain type of MOSFET such as the one from Infineon. This is repeatable work for you as well. So we provided the conversion assistance. And of course, then you can validate this conversion by generating the characteristics and comparing with LTspice. 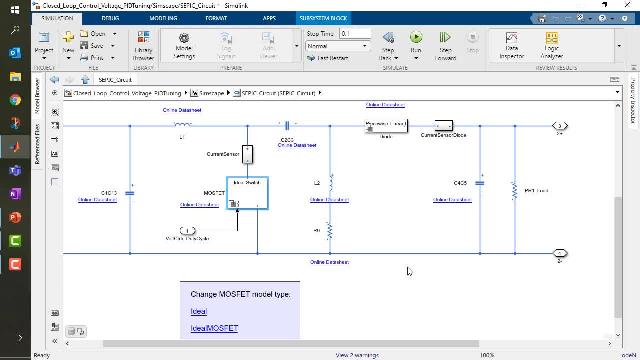