Tackling Tumors in a Single Step

Radiation therapy, or radiotherapy, is one of the most common treatments for battling almost all forms of cancer—but it’s far from perfect. The potential side effects are well known and vary depending on the location of the tumor. They range from extreme fatigue and bleeding to nausea and vomiting. Unfortunately, improvements to the technology have been slow. And with cancer as the leading cause of death worldwide, new treatment options are in high demand.

Radiotherapy uses high doses of radiation to kill cancer cells and shrink tumors. It’s performed after imaging scans such as positron emission tomography (PET), magnetic resonance imaging (MRI), or computed tomography (CT) locate the target tumors. Those images help medical professionals decide where to aim the radiation beam and determine the treatment field. But because the process requires two steps, doctors are forced to add a margin of error around the tumor. 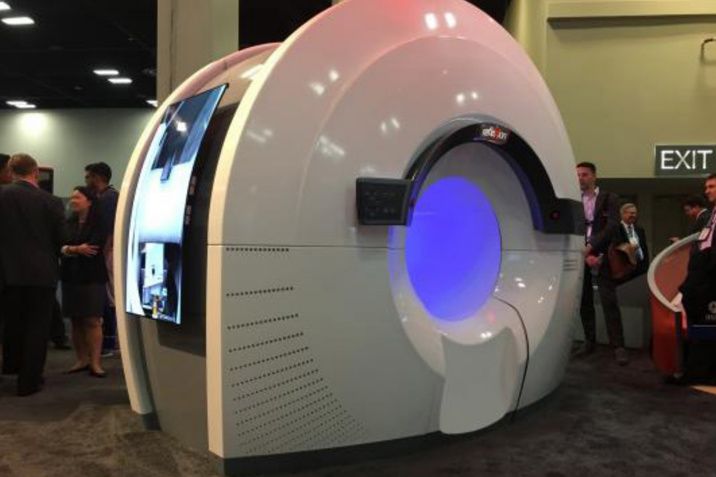 Dr. Samuel Mazin set out to change that when he cofounded RefleXion in 2009, using his work on PET-based algorithms as a starting point. RefleXion is developing technology that would change the two-step image-then-treat process to a single step. It has developed a biology-guided radiotherapy (BgRT) platform that combines a well-established cancer imaging technique, PET, and radiation therapy.

“Tumors move within the body because there is constant internal motion of our organs,” says Dr. Sean Shirvani, vice president of medical affairs at RefleXion. “We have involuntary contractions of muscles and internal organs. We inhale and exhale. Our hearts beat. With all of this movement, tumors are pushed, pulled, and rotated. In order to account for all of this motion, current radiotherapy often has to be directed at a tumor’s entire pathway within the body, which can have detrimental consequences for the patient.”

That practice exposes healthy tissue to radiation, thus increasing the likelihood of unwanted side effects of the treatment. With the development of a real-time, combined imaging and treatment method, doctors could mitigate that margin of error and offer a more targeted and safer radiotherapy to their patients. 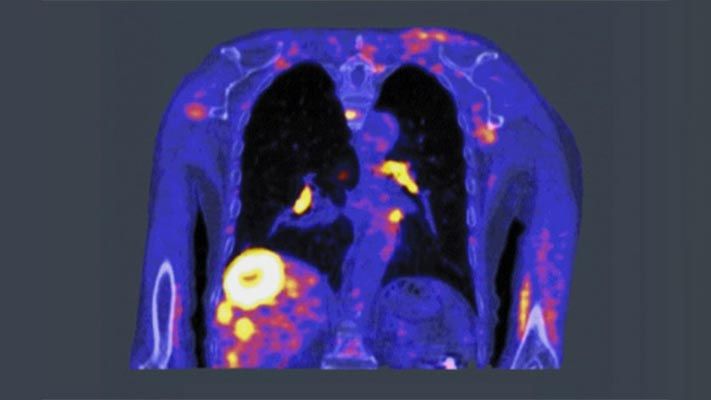 “A cancer cell emits a signal. So why can’t we just shoot right back with radiation to destroy it?”

“A cancer cell emits a signal. So why can’t we just shoot right back with radiation to destroy it?” That was the question RefleXion founder and chief technology officer Dr. Sam Mazin asked during his time as a postdoctoral fellow in radiology. “No one had thought about this before because it takes minutes for enough of these signals to accumulate to form a full PET image of the cancer. People thought they would have to wait for an image and therefore they couldn’t use PET in real time to track the tumor’s motion.”

Mazin’s idea was to bypass this image creation process and waiting period and to use the PET signals to directly control the radiation beam.

“If the tumor moves, the treatment moves with it, like a spotlight,” says Shirvani. “For patients, this can mean fewer side effects, a higher quality of life, and less delay to other treatments that may be necessary.”

One obstacle that held up the release of a combined imaging and treatment platform was the level of data and signal processing necessary to run the platform in real time. This type of platform requires the computer to process huge amounts of biological data and then adjust the radiation beam accordingly, all within milliseconds. That level of algorithm development and processing is highly sophisticated and takes years to perfect.

“Figuring out why something doesn't work is just as hard as figuring out how to build it in the first place,” says Yevgen Voronenko, software developer and principal algorithms engineer at RefleXion. “That's why we needed the full visualization and computational capabilities of a system like the one MathWorks developed. MATLAB helped us out a lot initially when we were building out the complex algorithm stack, and then later to debug and investigate when something didn’t work as intended.”

“We also used it to improve the performance and accuracy of the calculations,” says Voronenko. “Processing medical image data with the intent to guide a high-intensity radiation beam requires sub-pixel accuracy throughout the computation chain. That is impossible to achieve with only a C++ debugger.”

“If the tumor moves, the treatment moves with it, like a spotlight. For patients, this can mean fewer side effects, a higher quality of life, and less delay to other treatments that may be necessary.” 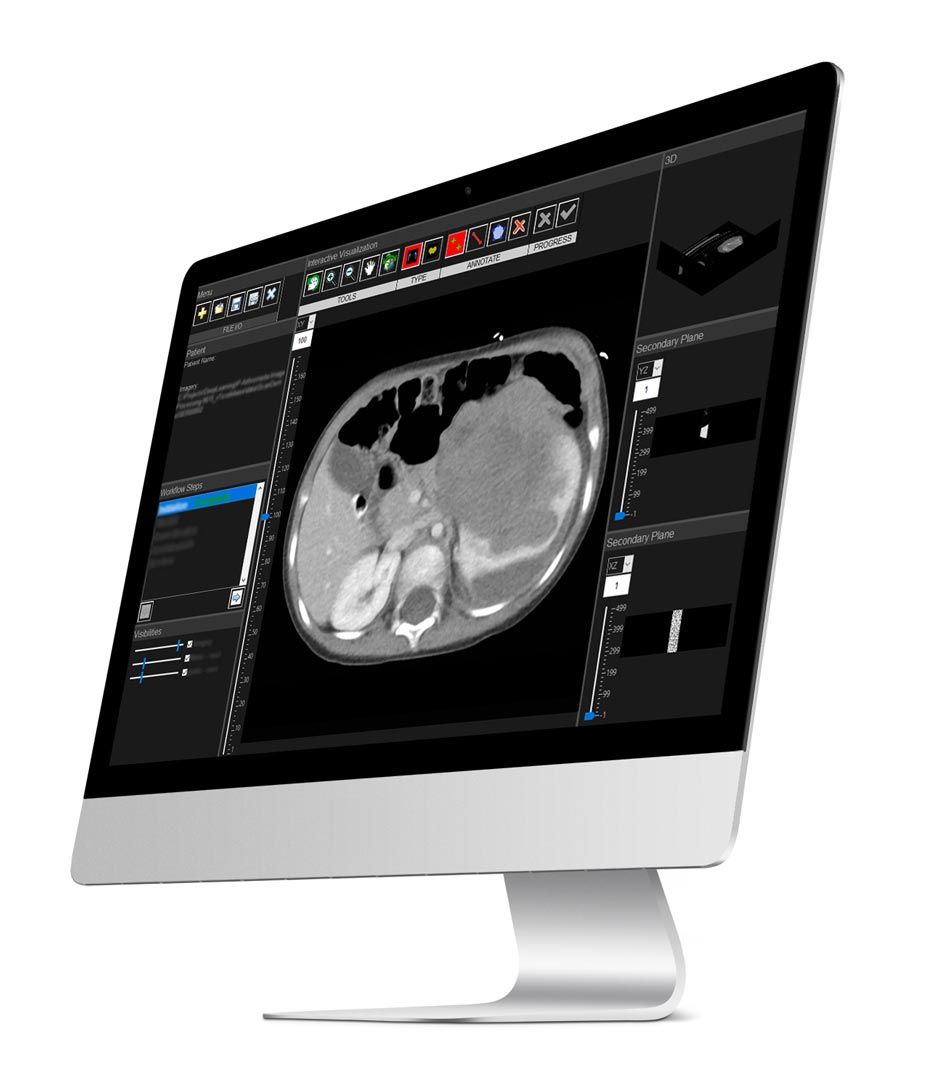 Every 100th of a second, the software makes a decision about the strength and position of the radiation beam while processing hundreds of PET signals in the same time frame.

Along with new software, RefleXion had to also build new hardware—combining commercial-off-the-shelf parts with custom-designed components. The RefleXion device is an X-ray source (a linear accelerator) mounted on a rotating gantry, along with an array of PET detectors. The RefleXion gantry rotates up to 60 times faster than in conventional radiotherapy systems and shapes the radiation beam to hit the tumor from different angles.

Their beam shaping device, called a multi-leaf collimator, needed to be designed from scratch. The RefleXion team used Simulink® from MathWorks to test out their ideas easily and efficiently before building the device. This approach saved the team time and resources.

“An elegant feature of BgRT is that its treatment advantages will not just apply to one tumor,” says Shirvani. “A single PET injection can generate the same homing signal at multiple tumors, which opens up the possibility of head-to-toe treatment of numerous metastatic sites in those with advanced disease.”

A well-known rule in cancer treatment is “the earlier, the better,” but sometimes symptoms are so subtle that catching the disease in its early stages can be very difficult. BgRT could help widen the treatment window for patients with advanced cases by treating all of the metastases in one session. “This could allow physicians to explore whether eradicating all metastases with radiation can improve survival or even result in durable remission for some patients,” says Shirvani.

“MATLAB helped us out a lot initially when we were building out the complex algorithm stack, and then later to debug and investigate when something didn’t work as intended.”

Throughout the 10 years of development, RefleXion has been engaging with the medical community to understand the pros and cons of current treatment processes, and to get feedback from physicians about their product. The new technology can fit into the same radiotherapy vault that institutions and hospitals currently have, making it easy to install and adopt.

The next step is getting biology-guided radiotherapy cleared for clinical use by the Food and Drug Administration. But by using already established practices, RefleXion hopes that process will be smooth, and soon patients will be benefiting from the new treatment.

Wireless Coverage from One Autonomous Aerostat Equivalent to 15+ Cell Towers

Voice Interface: The Touchscreen of the Next Century

Turning a Medical Crisis into an Engineering Challenge to Save Lives