“We needed to know if our communications system would support a 50% increase in data rate. By modeling and simulating the antenna, transmitter, and receiver designs in Simulink, we got a direct answer: Yes. We had confidence in this answer because the simulations showed us how the system performed.” 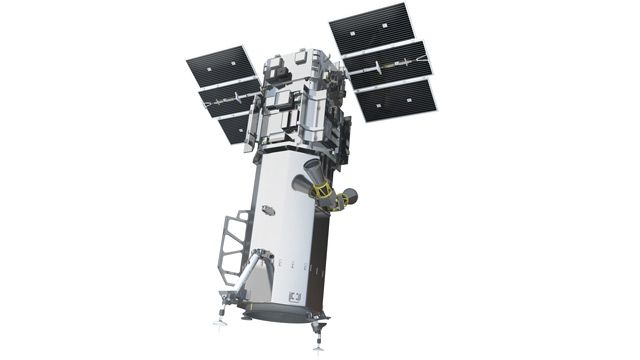 Rendering of the WorldView-3 satellite.

The WorldView-3 satellite from DigitalGlobe, now Maxar Technologies, is the industry’s first multipayload, superspectral, high-resolution commercial satellite. WorldView-3 is capable of imaging up to 680,000 square kilometers per day with a 31 cm panchromatic resolution.

To deliver all this imagery data back to Earth, DigitalGlobe satellites require communications systems that are both fast and reliable. DigitalGlobe engineers model and simulate these systems in Simulink® to gauge bit-error rates (BER) and identify opportunities for improving performance.

“If we have an uncorrectable bit error in our image data, we have to resend the image file, which is costly,” says Skip Cubbedge, aerospace engineer at DigitalGlobe. “Our Simulink simulations enable us to see exactly how hard we can push our systems to maintain both a maximum data rate and an essentially perfect link.”

DigitalGlobe communications systems operate in the X-Band between 8.025 and 8.040 GHz, which is adjacent to the frequency band used by the Deep Space Network (DSN). To avoid interfering with DSN signals, DigitalGlobe engineers had to meet stringent out-of-band emissions and power requirements, even as they sought to increase their downlink data rate from 800 Mbps to 1200 Mbps for WorldView-3.

The team needed to implement filters with steep edges, but such filters can distort the signal. Further, as they moved from QPSK to an 8-PSK modulation scheme, they needed to accurately model cross-polarization interference to ensure there was enough link margin for the system to operate reliably.

In the past, DigitalGlobe engineers working on similar projects used an off-the-shelf software package for communications systems modeling. With this package, BER simulations could take weeks, and licensing costs were high. DigitalGlobe sought a less expensive alternative that would be faster and easier to use.

The end-to-end Simulink model included an amplifier, an 8-PSK modulator and demodulator, an encoder and decoder, filters, equalizers, and the space-to-ground channel, modeled as additive white Gaussian noise.

They used the Filter Design and Analysis app in Signal Processing Toolbox™ to design and calibrate the system’s Butterworth filter. They modeled the amplifier and other RF components using RF Blockset™ and RF Toolbox™. They used the models to evaluate how RF effects affected baseband data rates. The models also enable them to trade off filter bandwidths with equalizer complexity.

To verify that the system had a bit-error rate of less than 10-6, they ran simulations in Simulink in which 10 million bits were transmitted. Additional simulations were used to analyze effects due to distortion, the environment, and the satellite’s elevation.