How do I extract data from MATLAB figures?

⋮
I successfully used this code to extract data from a .fig file before.
I attempted to extract data from another .fig file and I was unable to. I received this error message:
Error using get Invalid property found. Object Name: text Property Name: 'XData'.
Error in extract (line 23) xdata = get(dataObjs, 'XData'); %data from low-level grahics objects
I am new to MATLAB and I am unsure how to get this to work.

⋮
Hi, thanks for the very useful suggestions.
I have some problem when the file .fig that I open contains more figures and each figure is composed by several subplots.
How do I extract data from one precise subplot of one precise figure contained in the .fig file?

⋮
Edited: Michael Judge on 4 Dec 2017
Hello all,
Just wanted to point out that, if the data were plotted as a 2D matrix (where each row is a different line), none of the solutions on this thread give back the initial matrix (after conversion of YData to a matrix, of course). In fact, the rows in the extracted data are all out of order.
Any thoughts on this? Are lines created/indexed in any particular order when they are plotted from a matrix?
Thanks, Michael

⋮
When you plot a matrix by columns, then the order of handles returned from the plot() call is the order of the columns:
data = sort(rand(20,5),2);
h = plot(data);
Now h(1) corresponds to column 1, h(2) corresponds to column 2, and so on. You can confirm this with:
h(1).DisplayName = 'col1';
h(2).DisplayName = 'col2';
h(3).DisplayName = 'col3';
h(4).DisplayName = 'col4';
h(5).DisplayName = 'col5';
legend();
and see that indeed the item labeled col5 is the one with highest average Y (it was constructed that way by the sort() call).
However, the order of axes children defaults to the reverse of this:
>> get(gca,'Children')
ans =
5×1 Line array:
Line (col5)
Line (col4)
Line (col3)
Line (col2)
Line (col1)
because the rule is that the axes children are (by default) painted from last to first (first is on top, last is on bottom). This can be altered in a few ways, including some obscure specialized settings that were new in R2014b, but also the order can be changed with good old uistack()
When you recall a figure file and pull out the axes children, the axes children are going to be in the same order as was present in the axes when it was saved to the figure file. If nothing in the original code altered the order, that is going to be last column first. So if you retrieve the YData and mat2cell() it into a 2D matrix, make sure to fliplr() to get the original order.

⋮
Hi all,
Regarding subplots, I found that simply entering in "subplot(n,m,p)" to direct MATLAB to your desired subplot does the trick. Add it before you set a=get(gca,'Children'); There's probably a more clever way of doing it, but it worked for me. I'm using Felipe Bittencourt de Souza's solution below and 2018b.

Felipe Bittencourt de Souza on 15 Dec 2017
⋮
I was having the same error message mentioned before: "Error using get Conversion to double from cell is not possible."
I solved this issue with Walter Roberson's answer, using the following code:
open('example.fig');
a = get(gca,'Children');
xdata = get(a, 'XData');
ydata = get(a, 'YData');
zdata = get(a, 'ZData');

⋮
this works! thank you.

Yair Altman on 21 May 2018
⋮
Edited: MathWorks Support Team on 19 Apr 2021
Note that the official MathWorks answer above relies on opening and displaying the figure (using the open() function) before extracting its contents. This is both slow and potentially unwanted (we don't always want to display the figures), especially if we're looping over many FIG files.
Instead, users can directly read and analyze the *.fig file by loading it into Matlab memory using the load() function, since *.fig files are basically simple MAT files with a .fig (rather than .mat) file extension.
Fortunately, the internal format of these files has changed very little over the years - a few fields have changed their name, but the basic file data structure remained the same. So essentially the same code can be used to extract data from .fig files created a decade ago, as well as the latest Matlab release.
Note that the fact that FIG files are basically just MAT files is an undocumented feature of Matlab, and so it might change one day. But for now it is a very handy feature to use.
Additional information: https://undocumentedmatlab.com/articles/fig-files-format

⋮
what if you have many figures in one. how can we extract data from this one

⋮
firgure is has 3 lines as well the on that look like a fouth is a zeor line is applact across all figiesre but there is no actual data for it. Is it possible to extract the data even if the titles are note in just only need the data. Kindly assist me i need that data for my phd. The code given ablove is not working. I have attached the second figure with one data line but it is a 3*3 subpolt.

Michael on 13 Jun 2014
⋮
Edited: Michael on 13 Jun 2014
I tried to follow these steps, but when I got to objTypes = get(dataObjs, 'Type') I got this error:
Error using get Conversion to double from cell is not possible.
I don't know Matlab's figure format and I'm not familiar with Matlab's API for accessing figure data. I'm not sure what this error means.
If anyone else happens upon this: Matlab figures are just ".mat" files. The scipy.io library in Pylab can read Matfiles into numpy structures using the 'loadmat' command. One can then browse the figure data in Python and locate the data.
Edit: one can also step through the figure data in Matlab, by loading the figure using the command "s=load('Figure.fig','-mat')". The solutions using "get" never really worked for me. I think this is because every figure is structured slightly differently, and people are posting solutions that work for a particular figure, but don't generalize well. If you just grab the figure data structure, you can step through it and find what you need.

⋮
Edited: Cameron on 30 Jun 2014
I managed to get a similar error when running the line:
dataObjs = get(axesObjs, 'Children');
I'm not entirely sure why it's unable to access the handles using the 'get' method, but changing the code to
dataObjs = axesObjs.Children;
seems to have done the trick. Hope this helps.

⋮
i tried all answers and always get an error. i got the converting to double error too and with the last answer i got this error: No appropriate method, property, or field 'Children' for class 'matlab.graphics.Graphics'.
Error in daten_auslesen (line 5) dataObjs = axesObjs.Children; I dont know how to fix this code, so id be happy to get some help.

Yun-Han Lee on 27 Mar 2020
⋮
A simple workaround with a bit sacrifice in precision (pretty manual though): 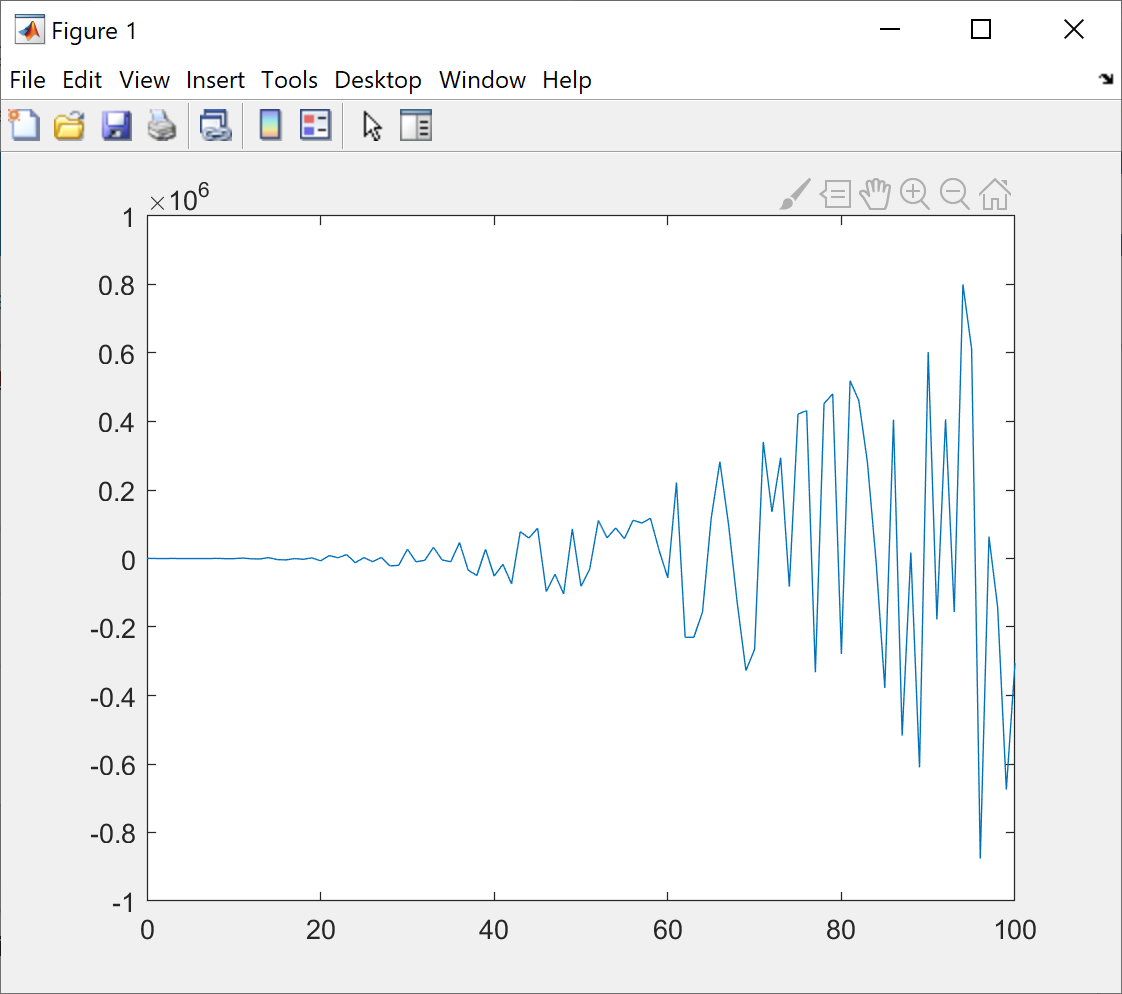 2. Choose 'shape perserving interpolant,' then hit the arrow at the buttom twice to expand to the full panel. 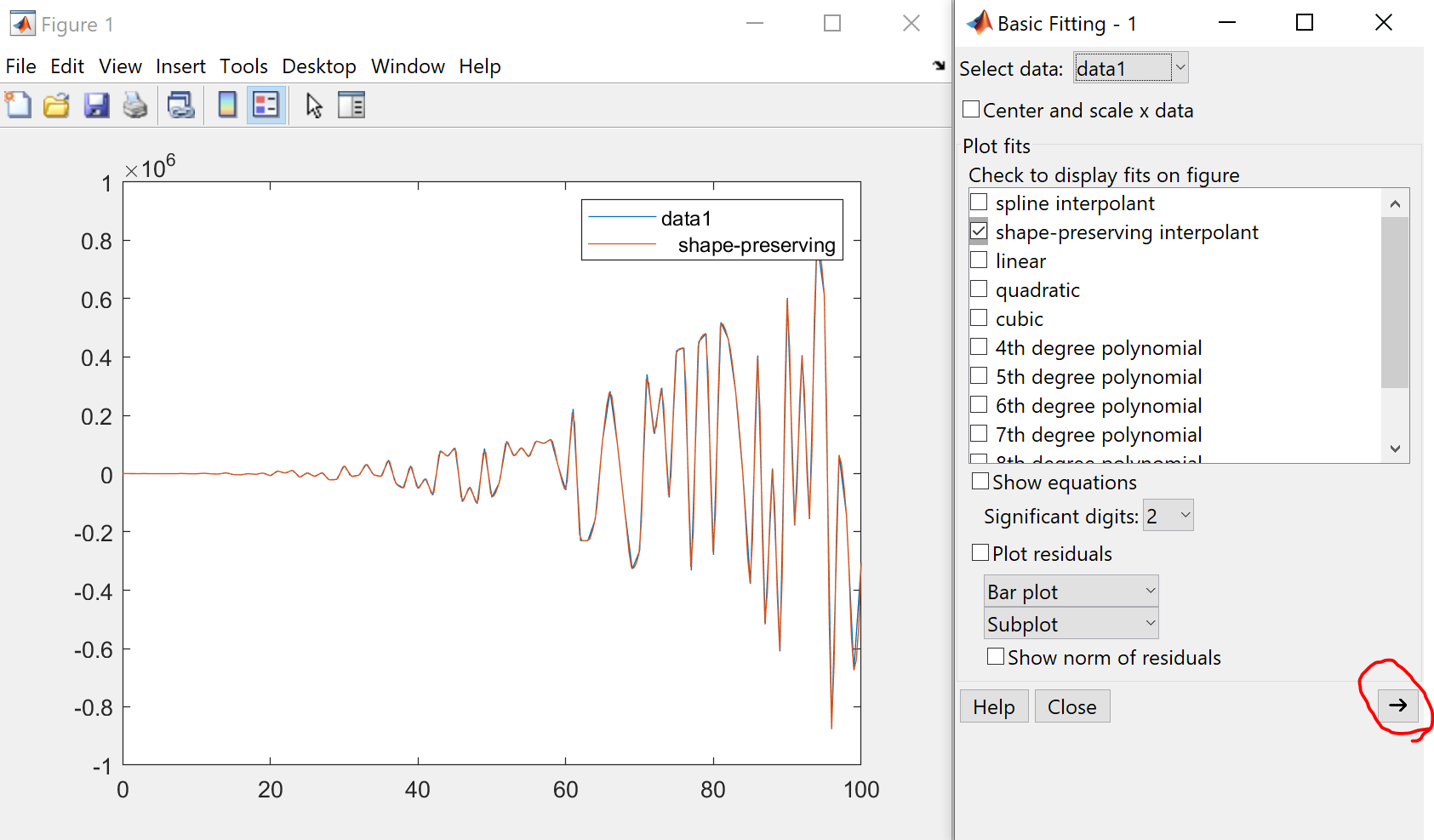 3. Enter x of interest, then Evaluate, and then Save to workspace.

⋮
This worked for me thanks a lot.

⋮
HI,
I have a figure like this. with a lot of local extremums. How do I export coordinates of these local extremems (to excel) without reading them one by one from the figure?

Parrish.Ch on 23 Jul 2015
⋮
Hi all,
I noticed people were having issues with getting the following error when attempting to run:
objsTypes = get(dataObjs,'Types')
Error using get Conversion to double from cell is not possible.
I think I have a solution to the issue. For surface plots, I noticed that the children of an axes object (so dataObjs in this case) may contain a subgroup that is a complex cell. You have to use cell2struct to break this cell into it's basic pieces so you can extract the data. Here is the code for my solution:
h = gcf;
axes = get(h,'Children');
dataObjs = get(axes,'Children');
Props = cell2struct(dataObjs,'SurfaceProps',2);
SurfaceData = Props.SurfaceProp;
XData = SurfaceData(3,1).XData;
YData = SurfaceData(3,1).YData;
ZData = SurfaceData(2,1).ZData;
**Before you just copy paste this code, there are a few important things to know.
My variable dataObjs is a 2x1 cell. The first index in the cell is empty but the second index is a 3x1 Group. I have to convert this cell group to a structure that can then be used to access my data. From there, I use cell2struct on the second index to accomplish this. The cell2struct generates a property that is named in the second argument of the cell2struct command ('SurfaceProp' for me). Props.SurfaceProp extracts the various "children" from the 3x1 Group in dataObjs. In my case, I have three objects in Props.SurfaceProp: two light objects and one surface object. The surface object contains the x, y, and z data. My surface object is the third index in the matrix generated by Props.SurfaceProp, so I use SurfaceData(3,1).XData to access the XData handle that is in the third index of the SurfaceData array.
I hope this helps!

⋮
Edited: Houghton on 12 Nov 2016
I tried your code. But I got an error.
Undefined function 'cell2struct' for input arguments of type 'matlab.graphics.primitive.world.Group'.
- I typed
which cell2struct
- I got the answer
built-in (/Applications/MATLAB_R2014b.app/toolbox/matlab/datatypes/@cell/cell2struct) % cell method >>
what should I do?
Thanks

⋮
Would you have some simple code that recreates this problem? My simple test does not create that kind of group, but it could well be that a different call does.

Chetanya on 10 Nov 2019
⋮
I wrote a small function to extract data from file following the MATHWORKS staff answer. Here it goes, https://www.mathworks.com/matlabcentral/fileexchange/73274-extract_data_from_figures?s_tid=prof_contriblnk
Please feel free to suggest if you find any bugs.

⋮
I used zdata = get(gca, 'CData') for get values for my 2D heatmap by slightly altering your code and I am thrilled! Thanks a ton!

⋮
You forgot to mention the error you get. But please remove this message and post it as a new question, because this is the section for answers. Thanks.
You will get an answer like:
lineObjs = get(dataObjs, 'type', 'line')
get() does not accept 3 inputs. Do you mean:
lineObjs = findobj(dataObjs, 'type', 'line')
? Note: Please delete this message even if this solves your problem.

⋮
I do not understand how this Answer will help anyone to extract data from a MATLAB figure??