Finding the H infinity norm of a system

Sam Chak on 22 Aug 2022
⋮
Edited: Sam Chak on 26 Aug 2022
Hi @Kashish Pilyal
Perhaps try using hinfnorm() to compute the H∞ norm of a dynamic system.
Edit 1: Looking at your code, it seemed that what you computed was the H₂-norm,

.
Here is an excerpt from the article: Interpretation of H-Infinity Norm: 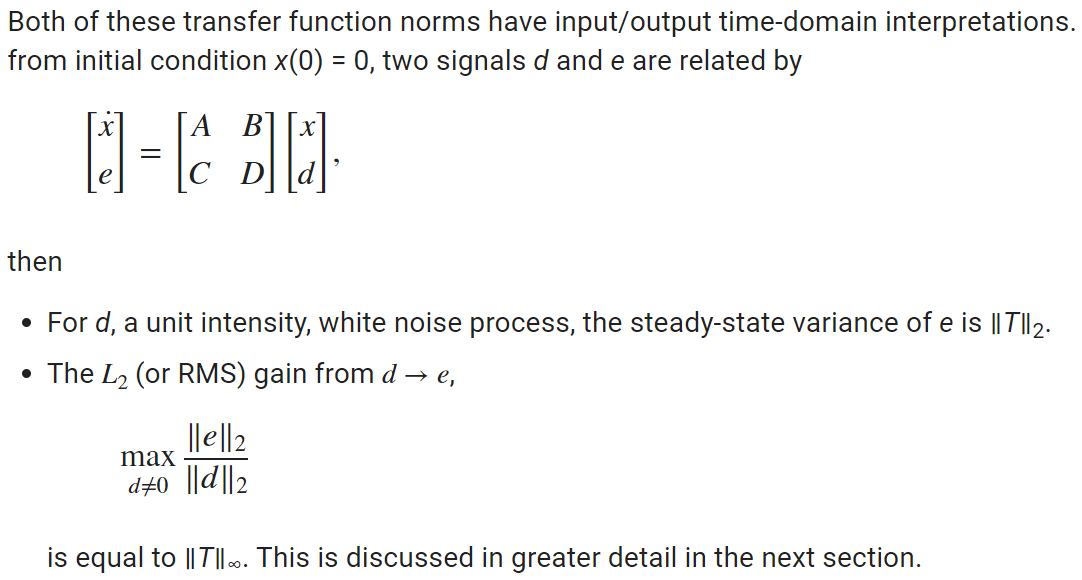 Edit 2: There are some algorithms provided in Kuster's thesis: "H-infinity Norm Calculation via a State Space Formulation".

⋮
yes but I have an array not a transfer function or a state space. The equations are too complex to write the system in simple form of Ax+bu.

⋮
Hi @Kashish Pilyal, can you recheck the source of your definition of the H∞ norm? I have added a link to the article that explains the interpretation of H∞ norm.

⋮
Edited: Kashish Pilyal on 23 Aug 2022
Yes, it is the maximum of the division of the L2 norm or H2 norm of the system and if I use the max command the result is the same as it is a single value in MATLAB.

⋮
Edited: Torsten on 23 Aug 2022
L2 norm of a function is the square root of the integral of the function squared over time, not simply norm(a_2).

⋮
Hi @Torsten,
So, can you tell me how to find the L2 norm of a vector in my case? and how does it differ from norm(a_2)?

⋮
Edited: Torsten on 25 Aug 2022
I don't know how it works here, but given a function u you get by a differential equation
du/dt = f(u,t)
and you want to calculate
sqrt( integral_{t=0}^{t=T} u(t)^2 dt )
you have to solve the additional differential equation
dU/dt = u^2, U(0) = 0
The L2-norm of u will then be
sqrt(U(end))
But when reading about the output of MATLAB's hinfnorm, this doesn't seem to be what you want:
https://de.mathworks.com/help/robust/ref/lti.hinfnorm.html

Paul on 25 Aug 2022
⋮
Edited: Paul on 25 Aug 2022
Following up on this comment ... Can the equations not be writen in state space form only because it's impractical to do so, or because it's not possible to do so, i.e., the system is not LTI and causal?
If the latter, then I'm not sure how the inifity norm is defined? Is there a definition?
If the former, how do you know that the infinity norm of the system is 1?
As far as computing the 2-norm of the input and output goes, I think using norm() is a reasonable approximation as long as (actually, it would be norm*sqrt(sampling period), but the sqrt(sampling period) cancels when computing the ratio)
aa) the system is BIBO stable (actually, I'm not sure if the inifnity norm is even defined for an unstable system, can't recall off hand, but even if it is, it woudn't be too useful)
a) the input has a finite 2-norm
b) the input and ouput are sampled at a fixed rate, which ode45 doesn't do with default settings
c) the output has finite 2-norm, which I think basically means the (square of the?) ouput has to at least approach zero asymptotically.
d) the simualtion is simulated long enough s.t. one can use a finite number of samples of the input and output to estimate the 2-norm of each.
Assuming that the system is LTI, and assuming that its infnity norm is 1, and assuming that the calculation of the 2-norms of the input and output are reasonably approximated, we also must bear in mind that, in general, the infinity norm of the system is NOT the ratio of the 2-norms of the output and input. Rather the infinity norm is an upper bound on this ratio, i.e.,
2-norm(y) <= inf-norm(H)*2-norm(u).
So, the obtained result might be correct after all.

⋮
The system is non linear so I am unable to write it in state space form.

⋮
How is the infinity norm defined for a nonlinear system? What is the basis for the claim that the inifinity norm of the system is one?