Nuno Nunes on 6 Oct 2022
⋮
Commented: Nuno Nunes on 8 Oct 2022
Hello, I'm looking for a fixed-step integrating function capable of solving stiff differential equations, with a really small step size (below e-14).
Is this possible? Does MATLAB have one? I couldn't make it work with the built-in ode*() functions.
Anything out there available? Maybe working on the Euler method?
NLN

⋮
No. But the Euler method (although completely inadequate for stiff differential equations) is easily programmed. 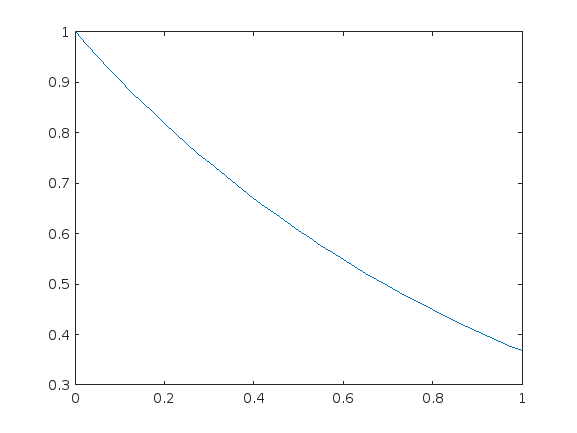 ⋮
Edited: Nuno Nunes on 8 Oct 2022
I guess I must really be a noob at this. My StraightRun function is defined as:
function [dy,X,Y,N,X_AS,Y_AS,N_AS] = StraightRun(t,y)
And I call it on my MainSimulation script as:
[T,Y] = ode45('StraightRun',t,y0);
Care to venture a guess as to why I cannot read any of the output variables besides dy?
FYI: dy is only being read on ode45 and doesnt' go through. What goes through is Y (having passed through ode45).

⋮
Edited: Torsten on 8 Oct 2022
I don't understand what you want to tell us with your comment.
Do you have problems calling the function "StraightRun" after ode45 has finished and get the additional outputs ?
In other words: Does the way I suggested above not work ?
You know that you'd better call as
[T,Y] = ode45(@StraightRun,t,y0);
than
[T,Y] = ode45('StraightRun',t,y0);
?

⋮
What I meant was:
The ode45 runs ok and gives out the supposed results, but none of the other outputs on StraightRun:
function [dy,X,Y,N,X_AS,Y_AS,N_AS] = StraightRun(t,y)
are readable (or callable) after ode45 runs for the time period t established.
(dy is a 1x7 double)
This is just bugging my mind like, how can the StraightRun function run through the solver, but leave out whatever other variables are not in 'dy' which contains the variables for the differential equation? what about everything else?
I've set them as an array 'info':
info(1) = V_A;
info(2) = beta_A;
info(3) = alpha_S;
info(4) = X;
info(5) = Y;
info(6) = N;
info(7) = X_AS;
info(8) = Y_AS;
info(9) = N_AS;
And I've even set 'info' as an output
function [dy,info] = StraightRun(t,y)
But after the ode45 runs, when I call any of the indices in 'info', I just get that it's not defined.
Breaking it down:
I want the same thing I already am able to do to Y: plot some of its indices like:
figure % 1 % Ship Trajectory
box on;
grid on;
hold on;
axis([0 2000 -700 700])
plot(Y(:,4) , Y(:,5));
xlabel('X pos [m]');
ylabel('Y pos [m]');
legend('Ship Trajectory in Straight Run');
But I want to do it to variables (in 'info') that are not transformed in ode45.
The thing is, I can't just run StraightRun (outside of ode45) for t times, because what I intend to obtain is dependent on the heading and velocity of the ship, which is something calculated in ode45.
For example
info(1) = V_A
In which V_A is the velocity of the air, which is dependent on the ship's velocity and heading and also on another set parameter on StraightRun which is the True Wind Velocity.
What I need is to read at every time step some variables working on StraightRun without having them pass through ode45 (because they are not part of a differential equation).

⋮
As you can easily see from the code I included, you must call "StraightRun" for all the times returned from ODE45 with the results for t and y you got. Then your variables that you included in the output list will be recomputed for these t and y values you supplied.

⋮
I see,
I've inserted this code:
for i = 1:numel(T)
[information] = StraightRun(T(i),Y(i));
end
But it just returns the error
Index exceeds the number of array elements. Index must not exceed 1.
(Renamed 'info' to 'information' to avoid problems with built-in 'info' function)

⋮
Edited: Torsten on 8 Oct 2022
I don't know the size of the array "information" that you return from StraightRun.
Adapt it according to what you have programmed.
for i = 1:numel(T)
[~, information] = StraightRun(T(i),Y(i,:));
end

⋮
I don't knwo if you're used to hearing this (pbbly are, considering that you help people), but here it goes:
@Torsten I Love you!
IT FINALLY WORKS!!
Still not sure what I'm going to do about the whole Unable to meet integration tolerances without reducing the step size below the smallest value allowed, issue, I guess I'll just tweek some of the physical parameters of the ship.

⋮
I get where you're coming from, and I honestly appreciate your concerns.
However, this is all inserted in a Master's dissertation where I have to simulate a ship's motion (amongst other things) under certain conditions and the ode*() functions available all give me the
Warning: Failure at t= ########. Unable to meet integration tolerances without reducing the step size below the smallest value allowed (4.547474e-13) at time t.
I asked my Tutor for help, and he said I should just program my own fixed-step integrating function and that the method could even be Euler's.
So, that's that.

⋮
Edited: Torsten on 7 Oct 2022
@Nuno Nunes
If I were you, I'd check the equations you are trying to solve and the way you implemented them, but not try to write my own solver.

⋮
Edited: John D'Errico on 7 Oct 2022
(NO. The method CANNOT be a standard forward Euler's method. It will not be stable for a stiff problem. It COULD POSSIBLY be a backwards Euler though. That might depend on your skill in coding, and you knowledge of the numerical method.)
However, you are using MATLAB. It is silly to be forced to wite your own code to replace a part of MATLAB. Your advisor is insane. Tell them I said so, not that it will really matter in some cases.
Would your adisor tell you to implement addition and multiplication of numbers on your own in MATLAB, because this is your thesis? Sorry, but that is just plain dumb. Ok, don't tell your advisor that. Or do tell them. I don't care what they think of me anyway. :)
My point is still fully valid. If you are using MATLAB to solve this problem, then just use MATLAB! Using MATLAB PROPERLY to solve the problem means you need to use the correct code from MATLAB to solve it. In this case, the solution is to use the stiff ODE solvers already part of MATLAB itself. Don't write your own code! I you learn nothing more here, it is that.
Freekin' bleepin advisors.
Anyway, IF you are seriously given no choice, then this is YOUR thesis in the end. You would need to spend the mental energy to learn to write a BACKWARDS (implicit) Euler method. You can surely find pseudo-code for a backwards Euler.

⋮
I gotta say... I like the way you express yourself @John D'Errico
My F'ing advisor is NOT a good person at all, he's just one of those academic guys that MUST have his name on everything. He totally hasn't helped me one bit, and I'm due to deliver this thesis at the end of the month (wish me luck).
I'm going to ignore what he's saying because it absolutely makes no sense that I should become a pro programmer, when nothing during the course has been aimed at improving my programming skills AT ALL.
Thanks for all your help and candor on this Question! Fr!

⋮
If there never would have been a complaint had you been able to successfully use ode45, then there cannot possibly be a valid problem if you use ode15s. Both tools are essentially part of the very same suite of codes. The only important factor lies in knowing which code is the correct tool to solve the problem.

Walter Roberson on 8 Oct 2022
⋮
Code for fixed step solvers is at https://www.mathworks.com/matlabcentral/answers/98293-is-there-a-fixed-step-ordinary-differential-equation-ode-solver-in-matlab-8-0-r2012b#answer_107643
If this is not able to operate at a fine enough time step then you may need to alter the code to use the symbolic toolbox.

⋮
personally I think it likely that your equations, at least as implemented, have an unavoidable singularity.
I am a big fan of setting up the equations using the symbolic toolbox, which makes it much easier to follow the equations to be sure that they have been expressed correctly, especially if you use Livescript (better output format). Then use the work flow shown in the first example of odeFunction to convert the symbolic expressions for numeric solutions.