Maximilian Dio on 21 Sep 2018
⋮
Answered: Fabian Giebeler on 15 Jan 2019
Hi there,
I am searching for possible options to layout a GUI. I just found uitab and uipanel. Is there a way to create a tree structure like in win explorer for folders: show and display the content in a folder. In my case just for some content.
thanks for your Help!
cheers Max

Walter Roberson on 21 Sep 2018
⋮
https://www.mathworks.com/help/matlab/ref/uitree.html -- App Designer
Historically there was also the undocumented uitree for regular figures; https://undocumentedmatlab.com/blog/uitree . That does not work now; I do not know when it was removed in that form. You might also be interested in https://undocumentedmatlab.com/blog/treetable -- I do not know if that would work in modern versions. 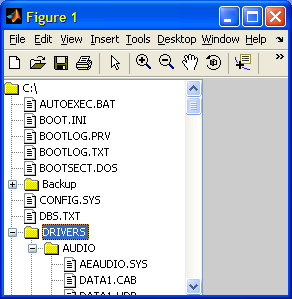 ⋮
>> uitree(gcf)
Error using uitree (line 64)
Functionality not supported with figures created with the figure function. For more information, see Graphics Support in App Designer.
In its default mode, it needs a uifigure instead of a traditional figure, but historically uitree() worked with traditional figures. In terms of what you have documented, the 'v0' flag has now become mandatory for use with traditional figures, such as
uitree('v0', 'Parent',gcf)

Fabian Giebeler on 15 Jan 2019
⋮
Hello,
i want to integrate the folderstructure form uitree into an appdesigner app.
Do someone know the procedure for this?
Many Thanks!