Saeid on 11 Dec 2020
⋮
In the field of polymer rheology, it is sometimes necessary to perform tests at different temperatures and then shifting them to one reference temperature. The viscosity curves like like this: 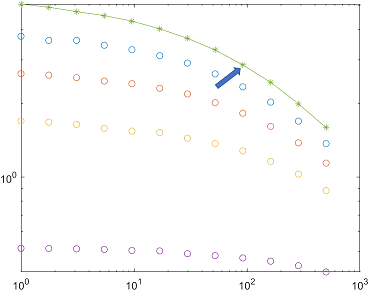 where the highest curve has been measured a the lowest temperature (which will also be chosen as the reference temperature) and x and y axes are shear rate and shear viscosity axes.
Shifting will be performed by multiplying both x and y of the lower curves at the same coefficient aT until every curve overlaps with the reference (top) one. Now, having the data arrays of the reference curve [ShearRate ShearVisc]_ref and [ShearRate ShearVisc]_T, which might have different lengths, how is it possible to use the optimization toolbox to perform this shifting and obtaining the shift factor aT as the solution or the final result? My problem is that I cannot find that many relevant or similar examples in MATLAB documentation.