AI-mag is a MATLAB toolbox (using also COMSOL and Python) for power electronic inductor optimization. The goal of this tool is to combine the accuracy of the Finite Element Method (FEM) with the evaluation speed of Artificial Neural Network (ANN).

This project is developed by the Power Electronic Systems Laboratory at ETH Zurich and is available under the BSD License. The code is also available on the ETH Data Archive.

The following performances are achieved:

This short tutorial explains how to install the tool, design inductors, and obtain Pareto fronts.

If you don't have MATLAB, you can quickly test the code on Code Ocean. Due to the limitations of Code Ocean, you can not use plots, GUI, or COMSOL.

A scientific paper has been published in the IEEE Open Journal of Power Electronics about this tool. The paper describes the method used in the tool and presents some results (ANN trainings and inductor optimization). The paper is available as open-acces: 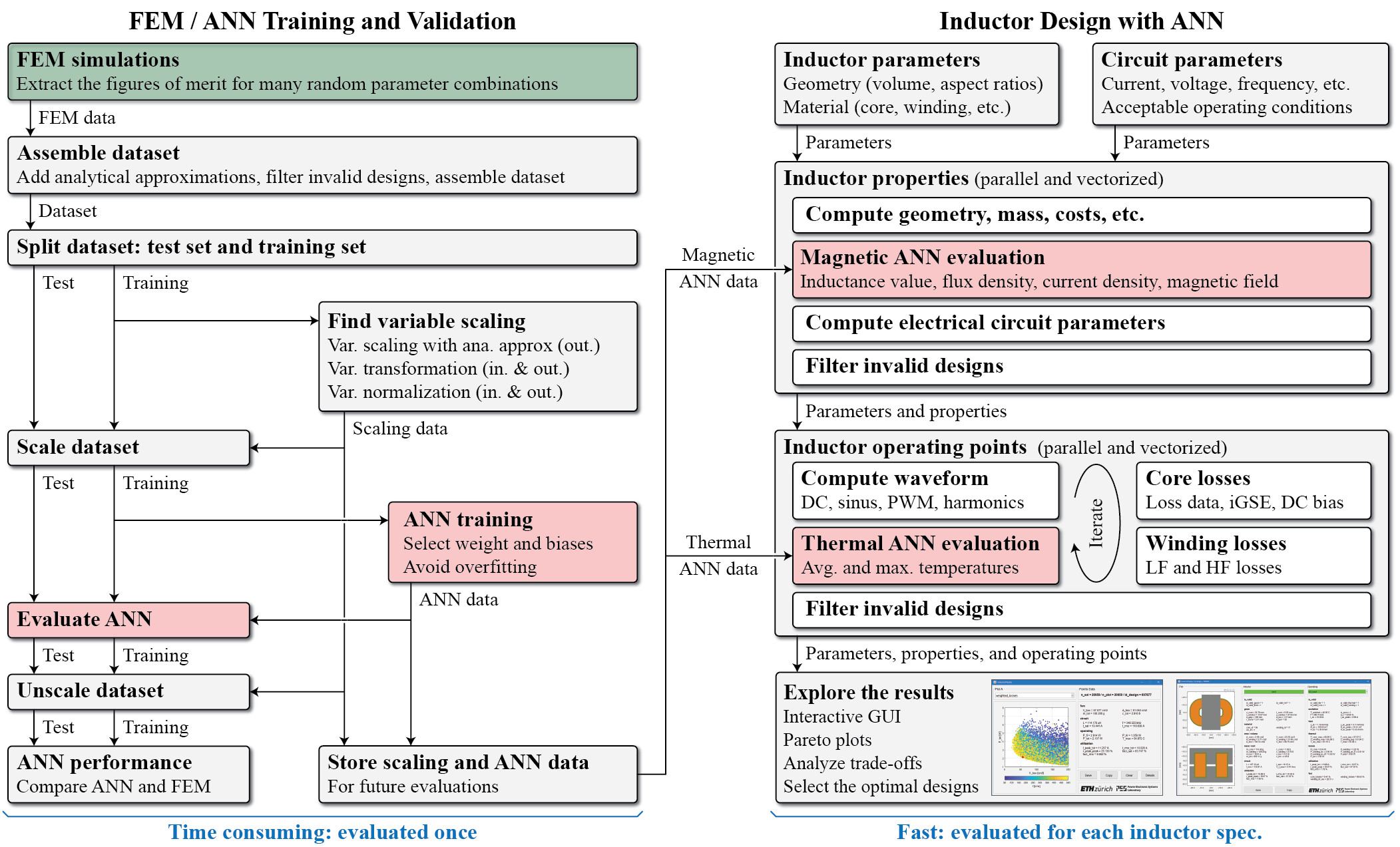 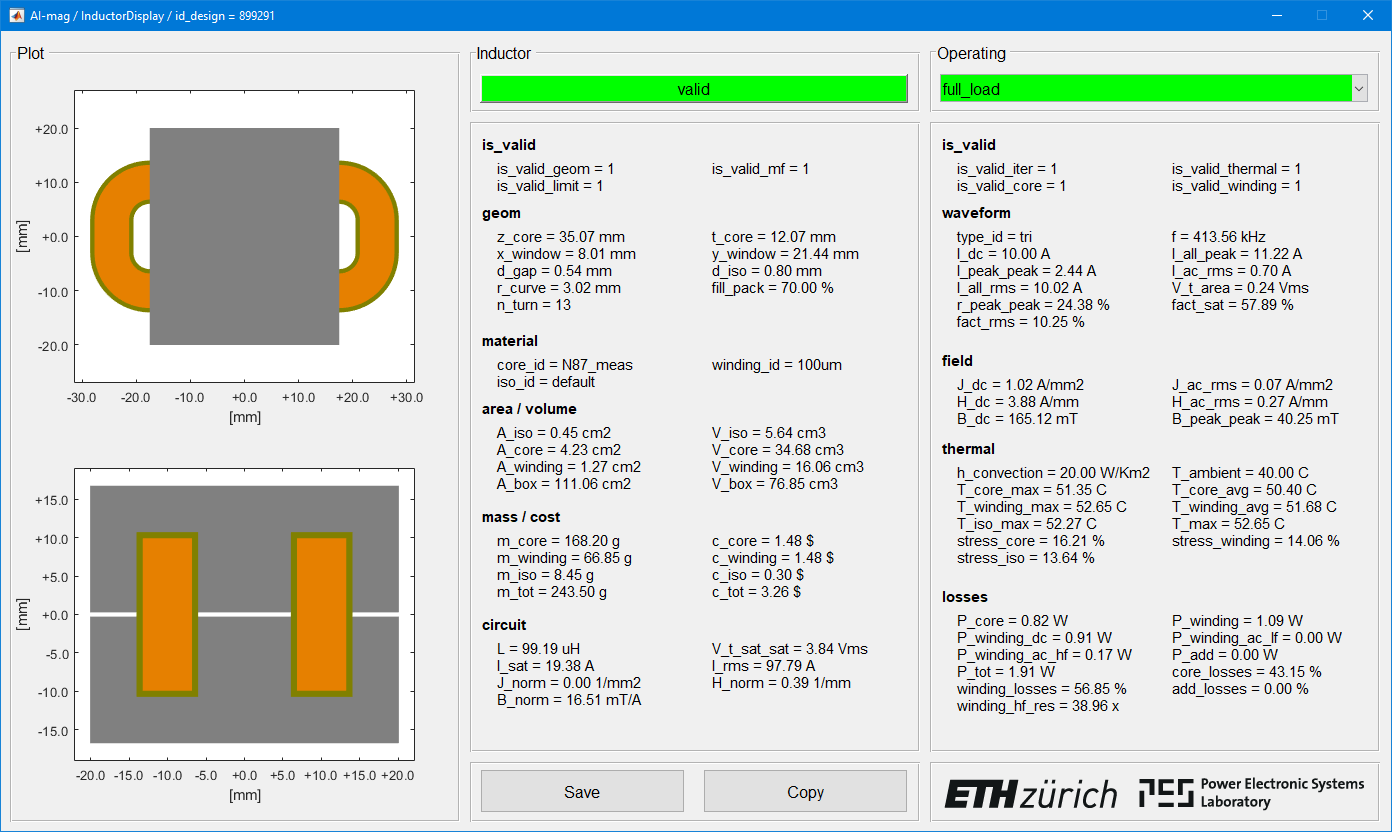 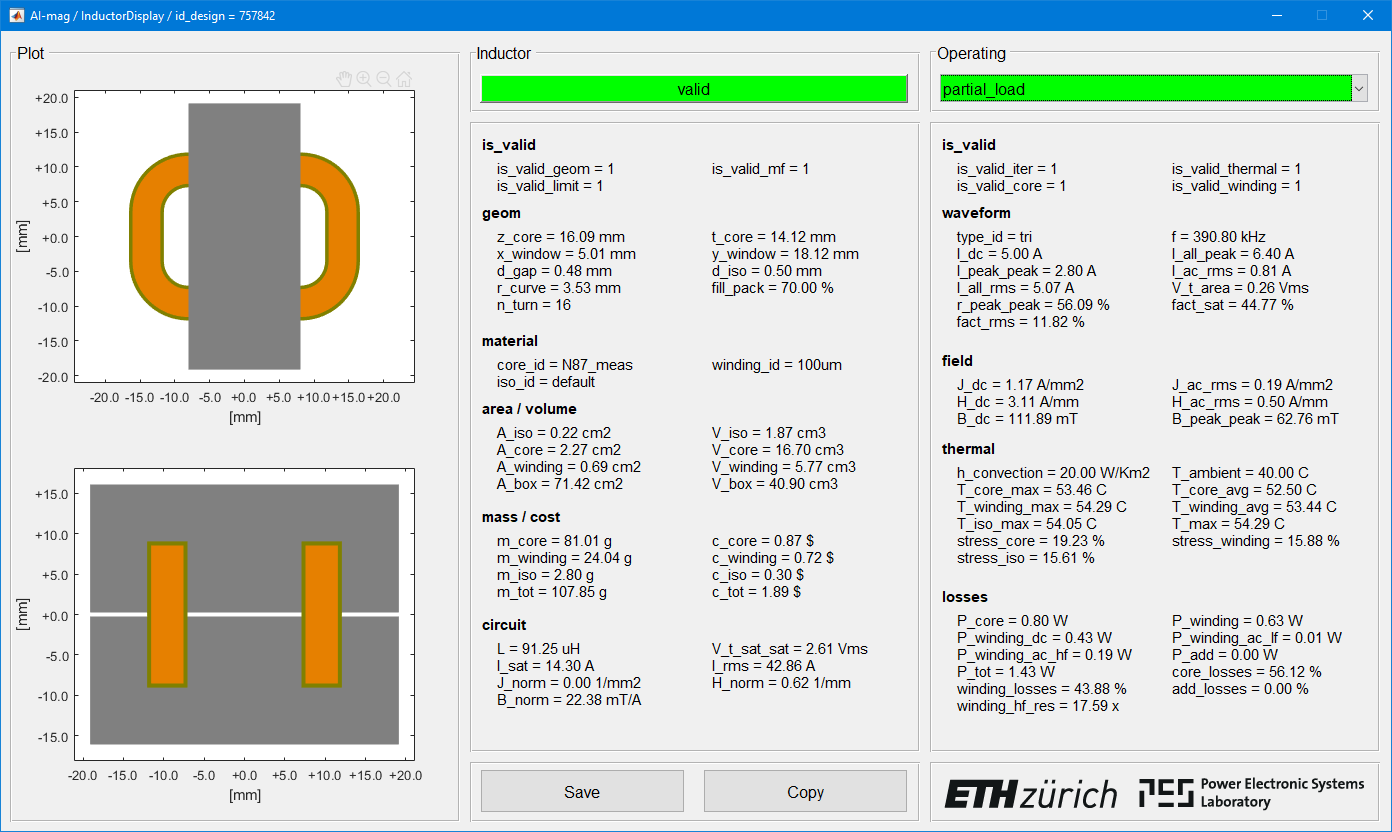 The following code structure is considered:

Currently the following inductors are optimized:

However, this toolbox is made in order to be easily extended with other inductors types, magnetic components (e.g., transformers, chokes), or optimization method (e.g., genetic algoritm).

The tool is tested with the following MATLAB setup:

The tool is tested with the following COMSOL setup (for FEM simulations):

It should be noted that COMSOL is only required to run the FEM simulations, not for the ANN/regression or the inductor design evaluation. In other word, COMSOL is required to generate the ANN training set, but not for running the design tool.

The tool is tested with the following Python setup (for ANN with Keras and TensorFlow):

However, the toolbox can work without Python, as long as the Python ANN engine is not used.

The tool is known to run with the following operating systems:

The following softwares were used to generate resources but are not required to run the code:

The source code is available in the GitHub Git repository and contains:

The releases are available at GitHub and contains:

WARNING: The repository does NOT contain the dataset and the trained ANNs.

WARNING: The dataset and the trained ANNs are only included in the releases.

Do I need Python?

Do I need COMSOL?

Can this toolbox handle big data?

How fast is the code, do I need a powerful machine?

I have a powerful cluster, can I use it?

Can this code run with GNU Octave?

Why the tool in MATLAB and Python and not only in Python?

Can I use another FEM solver (e.g., Ansys, OpenFOAM, Fenics)?

Created with R2020a
Compatible with any release