From the series: Improving Your Racecar Development

Model and validate your race car in a virtual environment. Prasanna Kannan, of IPG, and Christoph Hahn, of MathWorks, introduce you to the benefits of Simulink® and IPG CarMaker.

IPG has supported Formula Student since 2006. As part of that support, IPG provides teams with licenses of CarMaker and IPGKinematics for the entire season, tutorials and Formula Student specific examples, and two instructor-led training courses for teams. The support team can be reached at FormulaCarMaker@ipg.de. The latest version of IPG CarMaker may be used with the current 2015a (64bit) versions of MATLAB® and Simulink.

Prasanna introduces the IPG CarMaker in a three-part software demonstration. Starting with a generic model, he illustrates the Simulink interface of the IPG CarMaker. CarMaker also incorporates common tire models which nicely relates to an earlier episode of the MSRL on that topic as well as a driver model that can be customized to teams’ needs. In the second part, Prasanna shows how to extend models and add self-developed control strategies to the vehicle model. Prasanna finally highlights CarMaker’s capabilities to interface with MathWorks code generation tools to make your models run on hardware. CarMaker uses  Simulink Coder and a target language compiler file (tlc-file) to customize code for certain hardware platforms and operation systems. Last but not least, we highlight the real-time capabilities of both CarMaker and Simulink. More information on that topic can be found in the previous episode of the MSRL.

Prasanna and Christoph then discuss what teams should do based on their knowledge of the tools. Starting with the pre-built models allows them to get information for concept decisions. The more real data is used for setting up the model, the more accurate it can predict the race car’s behavior. Having the entire car modeled allows the team to perform lap time simulations and tune their race car for specific dynamic events such as acceleration or cornering. Teams can then go a step further and deploy and test their control strategy on an ECU. 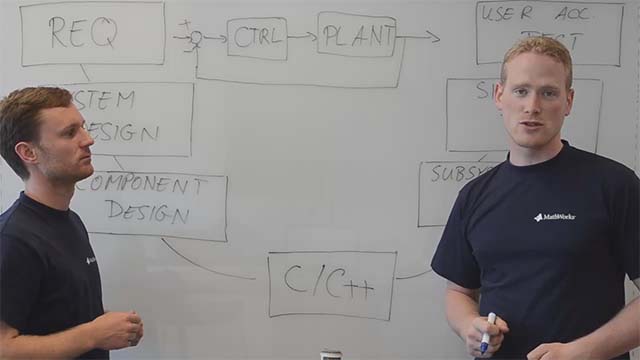