remove one directional translational blur or artifacts by sequential subtraction

AbioEngineer on 19 Sep 2021
⋮
Answered: Image Analyst on 26 Sep 2021 at 15:00
I have some cell images that are captured as the cells are moving through a small tube in one direction. EDIT: Motion is going down, not up. 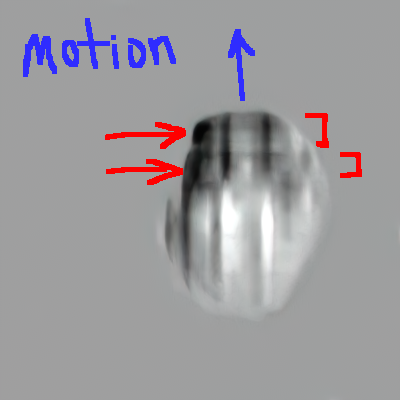 As you can see, there are some images where the cell looks like it was captured at two different time points, as if it was moving too fast for the camera, but it is not a continuous blur of the pixels, like in the MATLAB examples of the Wiener filter and blind deconvolution. I'm thinking it is possible to take the region of the cell that causes the overlap, and subtract that from the region below it to get the true underlying feature, then subtract that result from the region below that to get that true underlying feature etc. until finally we know the feature of the real cell. Does anyone know of an algorithm that can do this? and possibly allow the user to adjust how thick the overlapping portion of the cells is/ how many times it looks like it replicated the overlap?
The final result should hopefully be just a cell image without any of these duplicated features.

Image Analyst on 26 Sep 2021 at 15:00
⋮
You can use conv2() to do subtraction of a pixel from its neighbors. Ideally you'd want the convolution kernel to be the inverse of the PSF. Since you probably don't have that, just try guessing. You can also try deconvlucy().