Randy Chen on 2 Oct 2021
⋮
Commented: Randy Chen on 11 Oct 2021
Accepted Answer: Salini S Nair
I didn't realize that to model a set of governing differential equations of a dynamical system in Simulink will require some modifications on the original equations of motion. Here is what I am confused about:
I'm following a tutorial to build a simulink model on inverted pendulum:
https://ctms.engin.umich.edu/CTMS/index.php?example=InvertedPendulum&section=SystemModeling
At first, the GDE of the system is described as follows:

Then, when the GDE is embedded into the Simulink model, some modifications are made: 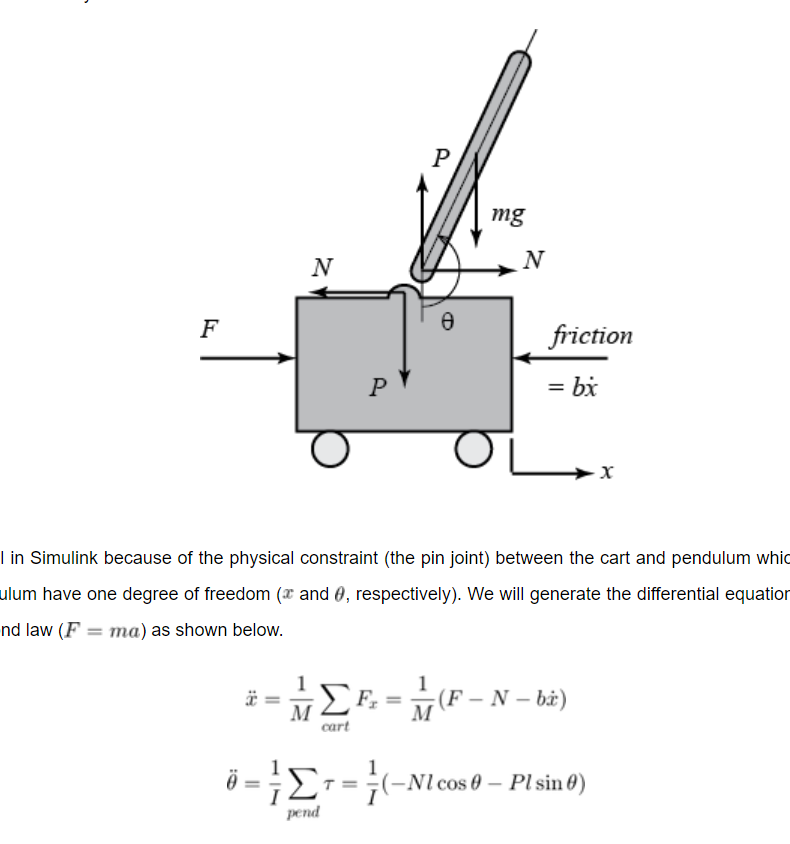 When I rearrange and isolate x_dot_dot and theta_dot_dot in the original GDE, I get something different from the new GDE used in the screenshot above. Why is this the case??

Salini S Nair on 5 Oct 2021
⋮
I understand that you are modeling an inverted pendulum example in MATLAB and Simulink based on the tutorial.
The Simulink model is based on the nonlinear equations of the system, as given in equations (3) and (6) in the System Modeling part of the tutorial: Control Tutorials for MATLAB and Simulink - Inverted Pendulum: System Modeling (umich.edu)

The first part of the tutorial focuses on analysis techniques for linear systems. Hence, the system modeling using MATLAB uses the linearized equations of the system (equations (10) and (11)) to demonstrate the use of transfer function and state space representations.

In the Simulink modeling part of the tutorial, Control Tutorials for MATLAB and Simulink - Inverted Pendulum: Simulink Modeling (umich.edu), the original nonlinear equations are written in a different form using the terms ‘N’ and ‘P’ for ease of modeling (Equations (1) and (2)).

If you substitute for ‘N’ and ‘P’ (equations (13) and (14)) in the above equations, you will arrive at the original nonlinear equations.

The modeling in Simulink can be done using the original nonlinear equations as well.
Disclaimer: Please note that the tutorial is an external resource and MathWorks is not responsible for the correctness of the content.

⋮
Consider the derivation below. Hope it helps clarify your query.
Starting off with the equations given in Simulink modeling part of the tutorial(Control Tutorials for MATLAB and Simulink - Inverted Pendulum: Simulink Modeling (umich.edu)) 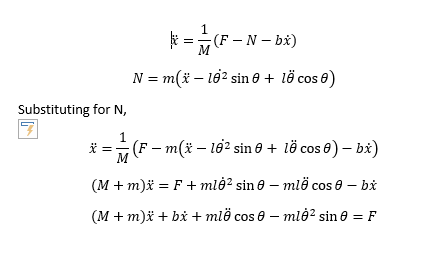