HELP.....running on different monitors has messed up GUI

Jason on 24 Oct 2014
⋮
Answered: Siddharth Sundar on 27 Oct 2014
Accepted Answer: Siddharth Sundar
I often run my matlab GUI's on my works PC which is widescreen. Sometime I remote in using my PC at home which has a different screen size (its old fashioned and almost square).
After running on the smaller "square" monitor, when I return to my larger widescreen monitor at work, the GUI is all messed up. It resizes the main figure but keeps the items on it in the same place. This means some items are hidden. I cannot unhide them. I have tried using the little black box at the bottom of the screen (circled in red). I did notice that when I was using between two monitors, that I had GUI-Options_Resize set as non-resizable. (I understand now that this needs to be set as proportional)
How can I set the initial figure to expand but keep all the objects on the figure in the current locations.
Also how to prevent this happening again? 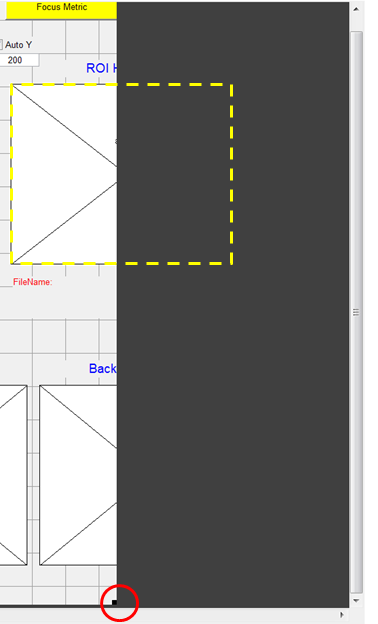 ⋮
I tend to use 'normalized' units for all components (including the figure itself) so that things at least resize proportionally on different size monitors. It isn't ideal, but it does avoid having components completely missing.

Siddharth Sundar on 27 Oct 2014
⋮
Setting the Resize behavior property to "Proportional" causes all the units of the objects to be set to 'normalized'. This will make sure that the components resize proportionally with their parent objects and hence should not cause conflicts when using different monitors. The only exception is that the units of the figure (background) are not changed. You have to change this manually (either programmatically or from the Property Inspector for the figure).
In order to prevent this from happening again, please try to make sure that the Units property for all the UI objects are set to 'normalized' when creating the GUI.