Reading ADC data from MSP430 to Matlab via serial port

Hiril Patel on 15 Jun 2022
⋮
Commented: Hiril Patel on 18 Sep 2022
My situation is
1. external ADC samples from one channel and transmit to Serial port Via Uart and then switches over to second channel to do same and then third.
2. I manage to view data in Hterm and it looked quite fine.
3. I want to plot it live in matlab- I know there are ways to do it but can someone here explain me a basic step by step to achieve my objective?
I have basic idea of what i should be doing
It would be nice if someone points out me for where to look for point 2 and 4 specifically.

⋮
Actually I dont have answer to that for following reason

⋮
If you do not have a maximum size for the array, then you need to grow the array dynamically, which can kill the performance if you do not plan for it. See for example John's https://www.mathworks.com/matlabcentral/fileexchange/8334-incremental-growth-of-an-array-revisited?s_tid=blogs_rc_4

⋮
plotting as data comes in also needs some thought as you do not want to keep creating new graphics objects. I recommend using animatedline(), possibly with the maximum points limit turned on.

⋮
ok I understand the memory limitations here. So if I resort to recording the data first and later analyzing it on matlab, still I could not find any example of grouping data coming from serial port in following way( i am not looking for direct answer):
Can you advice me for this question?

⋮
Read from each channel. Then
counter = counter + 1;
all_data(:, counter) = samples;
I used columns instead of rows because that is more efficient.

⋮
Thank you for the suggestion but I didn't quite understood it well so I have proceeded with following code:
clear all;
clc;
%USB port config
delete(instrfind);
s = serial('COM11','BaudRate',115200,'databits',8,'stopbit',1);
fopen(s);
data = fscanf(s);
adc_data = split(data,"/"); %I have inserted "/" in my microcontroller code to send that at beginning of channel 1 so I can have data seperation in matlab.
%Closing port
fclose(s);
I haven't yet designed loops yet but the problem is how should i convert them into hex values since the split command make a cell to store the data.

⋮
Could you show an example of what is being sent? And is it binary or character? 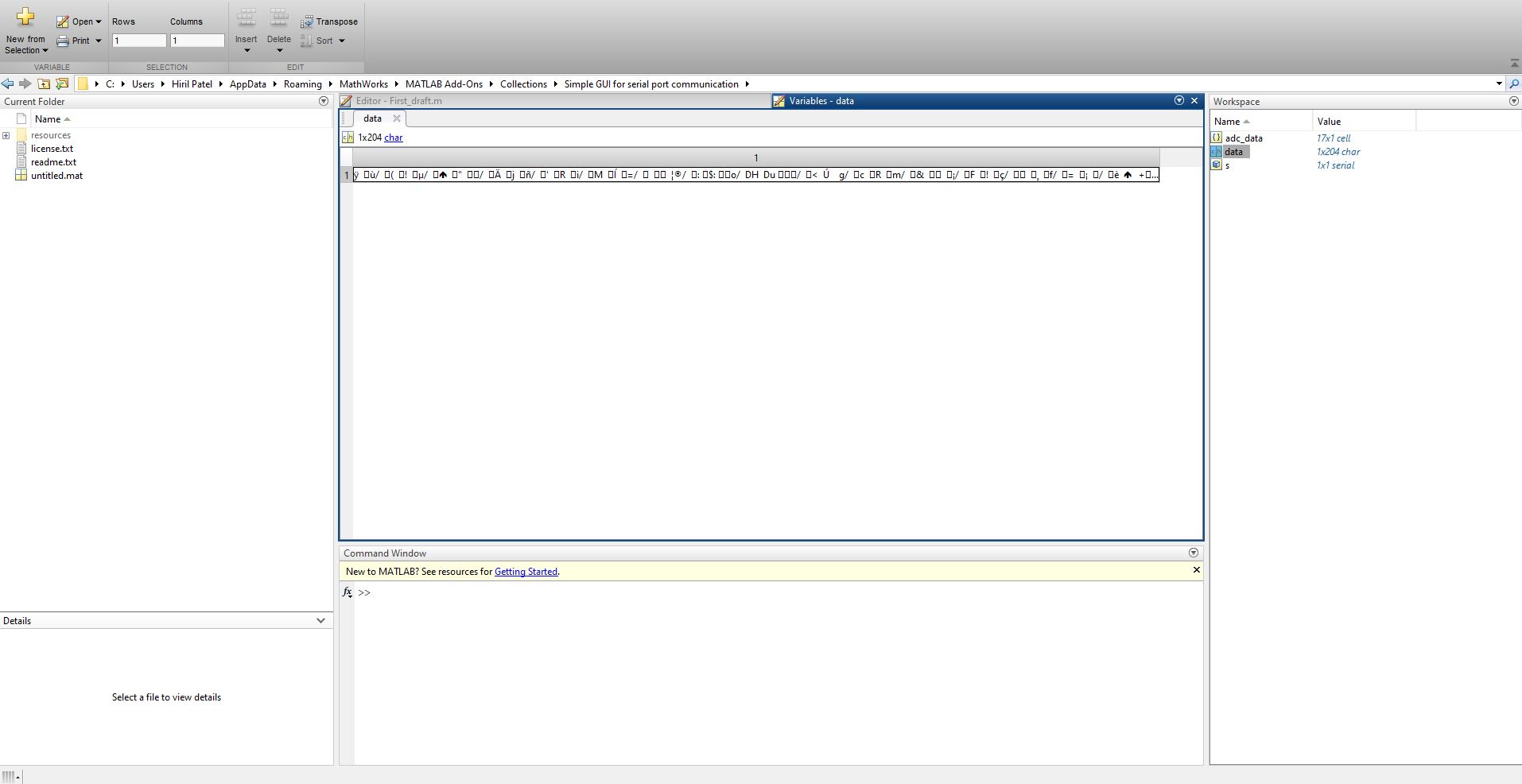 ⋮
You have binary, and it looks like you have a different number of bytes at times. You just might be sending a space after each / but that is not clear. If that is / space then it is generally followed by 8 bytes. But sometimes it is only 7 and sometimes it is 9.
You should switch to one of the following schemes:
1. Write numbers in character form, either decimal or hexadecimal, with non-number between the entries. Either put newline after each individual number or put newline at the end of a group of samples; or 2. Write numbers in binary using a fixed number of bytes per entry, so that you can ask to read a fixed number of bytes with no delimiter; or 3. At the beginning of each burst of numbers, write a byte (or two) which is the number of bytes that follow in that packet, with no end of line. The input side reads the size (fixed size) and uses the size to read that many bytes; or * use a variable length binary stream with a fixed termination byte, with the binary stream having been carefully adjusted so that it never accidentally includes the termination character. For example you might use newline, and everywhere that newline would have been sent as data send 255 0 and everything 255 would have been sent, send 255 255.

⋮
ok so I semi followed your advice in a way and put unique delimiters before transaction of each channel;:
channel 1 has delimiter = /A/
channel 2 has delimiter = /B/
channel 3 has delimiter = /C/
and then i used function
data = fscanf(s);
adc_data = split(data,["/A/","/B/","/C/"]);
but now the result comes in 74x1 cell with sequential results. is there any commant to split data in three seperate arrays/files/cell for seperate delimiter?

⋮
Look at https://www.mathworks.com/matlabcentral/answers/uploaded_files/1036145/Capture.JPG in your display of the input data. That's the one that starts
ÿ ֋ù/
Those are binary not character.
You have two choices:
You only need things like your /A/ or similar if you are sending the channels in inconsistent order. For example if you had a series of devices that generated interrupts when it was ready, and you wanted to send the data in the order received, then there might be reason to tag each value according to the channel it is associated with.

⋮
Kk I figured out solution for the whole problem but this include both python and matlab since I am a bit more proficient in it so now i am recording data in csv file in python and later importing it in matlab for furthur calculations.
Thank you million for all these advices they helped me in many ways.
regards
Hiril Patel

⋮
Thank you this works but the resulting values in sols are in cell array containing struct with symbols. I am making a for loop to extract those values but is there any efficient/direct way to do it? I read of 'extractfield' but had no success with handaling this data structure.

⋮
Hello again,
I had to change the formula since this one didn't yielded true results. But right now I don't know how to ask this query on internet so I had to ask it here.
the new formula contains serveral condition in order to get correct resutls. I want to know how to apply those condtion on each cell. Here is the query:
I have three equal size csv file. I have to take one value from each file from same row of those three file and compute it to get a value. I was able to do that, it is simple. But now what I need its that those computed value needs to be passed from certain condtion in order to apply next formula in order to get true value. Can you tell me how should i take those computed value(all the computed values satishfy a certain condition on which their formula changes).
I hope I have explained it in understandable way.
for more information, I am using these base CSV value to get principle strain value and principle strain direction.( I am able to find principle strain value but the direction has some condition in order to get it calculated).
this is hte reference document:( on page 197 and 198)
https://d1wqtxts1xzle7.cloudfront.net/44775005/An_Introduction_to_Measurements_using_Strain_Gages-with-cover-page-v2.pdf?Expires=1663533520&Signature=M9JIjnPDt-s9E~EJgEmtKS9Upn5PQtALRdkohL9O7~L-LnVKwFcJ9Y56s-VZSs9K8JDP5jsjbTfuZxel03mLz550OnCJBDOQ5XKWtDaKMmOAKn7w6QyDaONjm~9gV3i3TxlN~SqVzO9npY4En0-CWwzdMbdkFAhrurOV7iROWhDbNKtIQa5JIrvBQC7pvEMFniuL3hybZTY3oEgb7HYSpbifde9x0IOEvJZgKpRsPUOdoSu-uQQ2DE6DNVlpXi4c3V7utGwaBqSSbieLhiEQTHcA-IJtYI3bmwhz120Us1wDqF8jXtFqdMPlM5o9~y2RF3tK9xlOhEMMUcdhfHOLAA__&Key-Pair-Id=APKAJLOHF5GGSLRBV4ZA
thank you