Effesian on 8 Aug 2022
⋮
Edited: Effesian on 26 Aug 2022
Accepted Answer: Brian Fanous
Hello,
I would like to generate some synthetic IMU (accelerometer and gyroscope only) data given a sampled 3D trajectory using the imuSensor system object from MATLAB's navigation toolbox.
The IMU sensor object https://www.mathworks.com/help/nav/ref/imusensor-system-object.html requires acceleration (in the local navigation coordinate system, e.g., NED) and angular velocity (also in the local navigation coordinate system). I only have waypoints (positions in 3D) and assume that regarding orientation, there is no auto-roll or auto-pitch, but just "auto-yaw" meaning that the nose points always in the direction of movement.
I started with a simple trajectory, a circle in the plane: (cos(t), sin(t), 0) and sampled it (e.g., with 10 Hz one full revolution) to obtain "waypoints". See figure below: 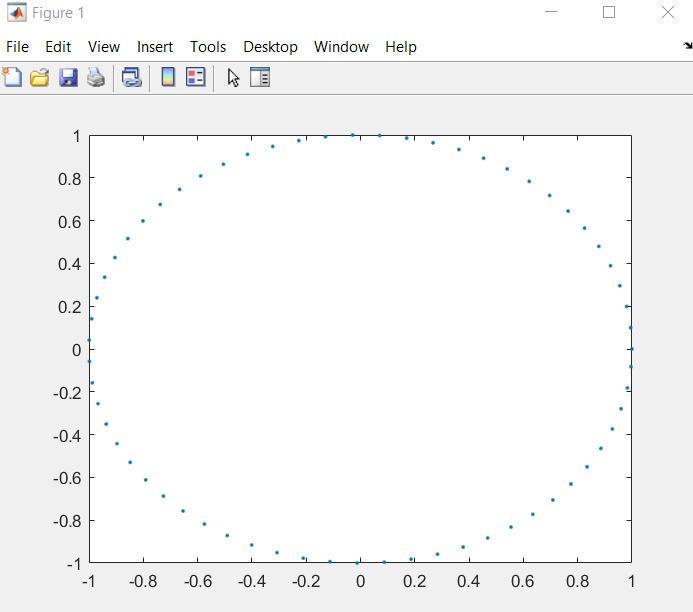 Using the waypointsTrajectory object https://www.mathworks.com/help/fusion/ref/waypointtrajectory-system-object.html, I obtain via [position,orientation,velocity,acceleration,angularVelocity] = trajectory(), the acceleration and angularVelocity (in the local navigation coordinate system), which are required by the IMU sensor object to output accel and gyro readings in the sensor body coordinate system. As stated above, I use no auto-pitch, no auto-roll, only the auto-yaw, a setting which is implicitly used by the waypointTrajectory object.
The resulting accel data (in the sensor body coordinate system) confuse me though. See below:

On the body z-axis, as expected we measure gravitational acceleration, but on the x and y we have a sinusoidal acceleration. If my device is moving with "auto-yaw" along a circle (I verified that speed is constant) shouldn't I just see a constant acceleration on the x or y axis (namely the centripetal acceleration)?
Thanks!

Brian Fanous on 11 Aug 2022
⋮
The last line of your code:
[accelReadings, gyroReadings] = imu(acceleration, angularVelocity, orientation');
has a sublte but very important bug. Just like for complex numbers in MATLAB, when you use the ' operator on a quaternion array you are taking the conjugate transpose. So
orientation'
is actually conjugating all the quaternions in the array and transposing the array. You should just use the transpose operator here:
orientation.'
which does not conjugate. Try that and you'll see the sinusoidal artifact in the accelerometer signal disappear.

⋮
@Brian Fanous: Thanks! That fixed the issue. Now, besides gravity the simulated accel readings are constant on the y-axis and zero on the x-axis. If I am not mistaken this means that the x-axis points along the direction of movement and the y-axis in the opposite direction of the center of the circle such that is captures the full centripetal acceleration (with a minus sign). 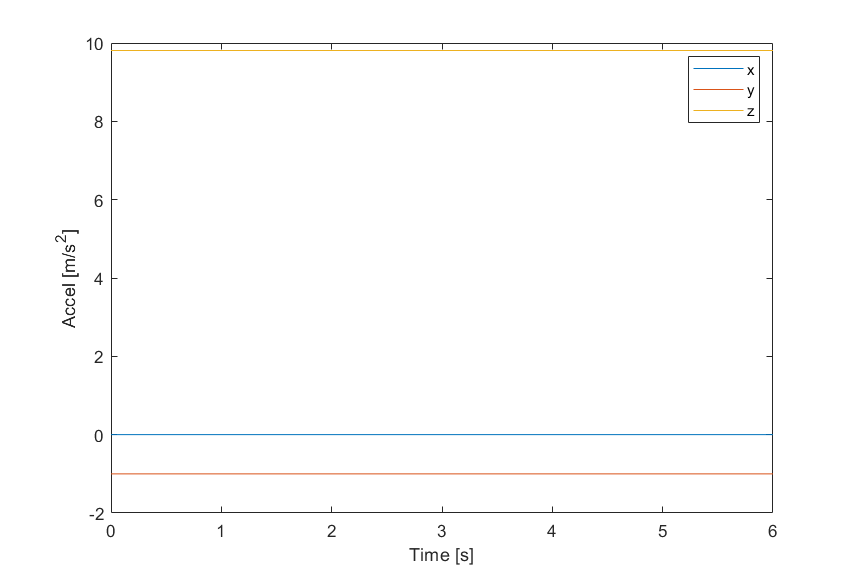 ⋮
Edited: Effesian on 13 Aug 2022
I have a follow up question. If it's better, I can ask it as a new question.
Using
trajectory = waypointTrajectory(waypoints', t, 'SampleRate', fs, 'AutoPitch', false, 'AutoBank', false, 'Velocities', velocityWp');
and
[position(count,:),orientation(count),velocity(count,:),acceleration(count,:),angularVelocity(count,:)] = trajectory();
to obtain acceleration and agular velocity values and feeding them into the imuSensor model
[accelReadings, gyroReadings] = imu(acceleration, angularVelocity, orientation.');
with waypoints forming a circle as shown above, now all works fine. However, if I provide the orientation explicitly as in
trajectory = waypointTrajectory(waypoints', t, 'SampleRate', fs, 'Orientation', orientation_atWp, 'Velocities', velocityWp');
such that the nose points along the trajectory (as in auto-yaw) and we have no pitch and no roll, then I get "jumps" in the gyro signal at the beginning and end. 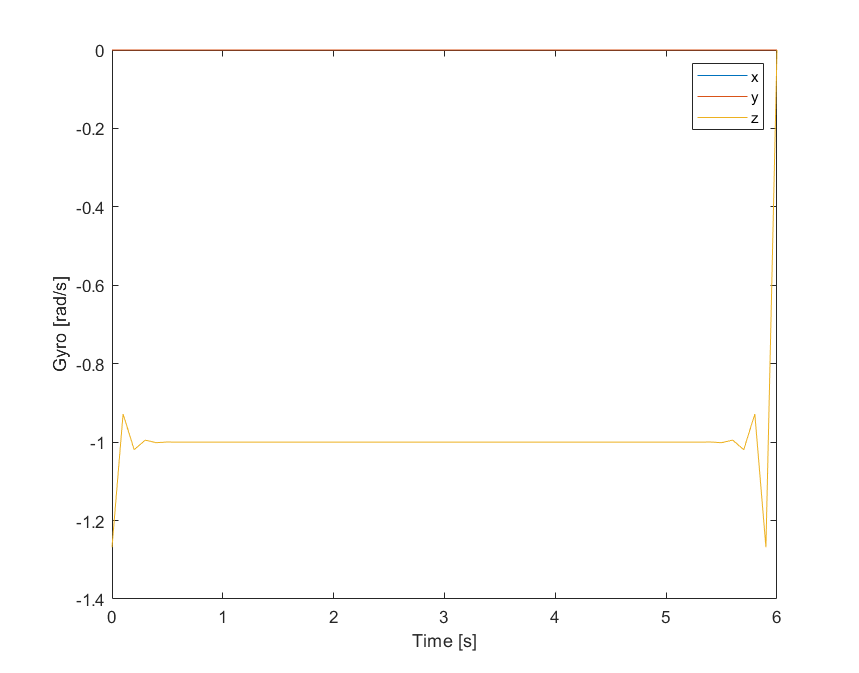 I observed that the angular velocity signal is not constant, but has jumps at the beginning and end. 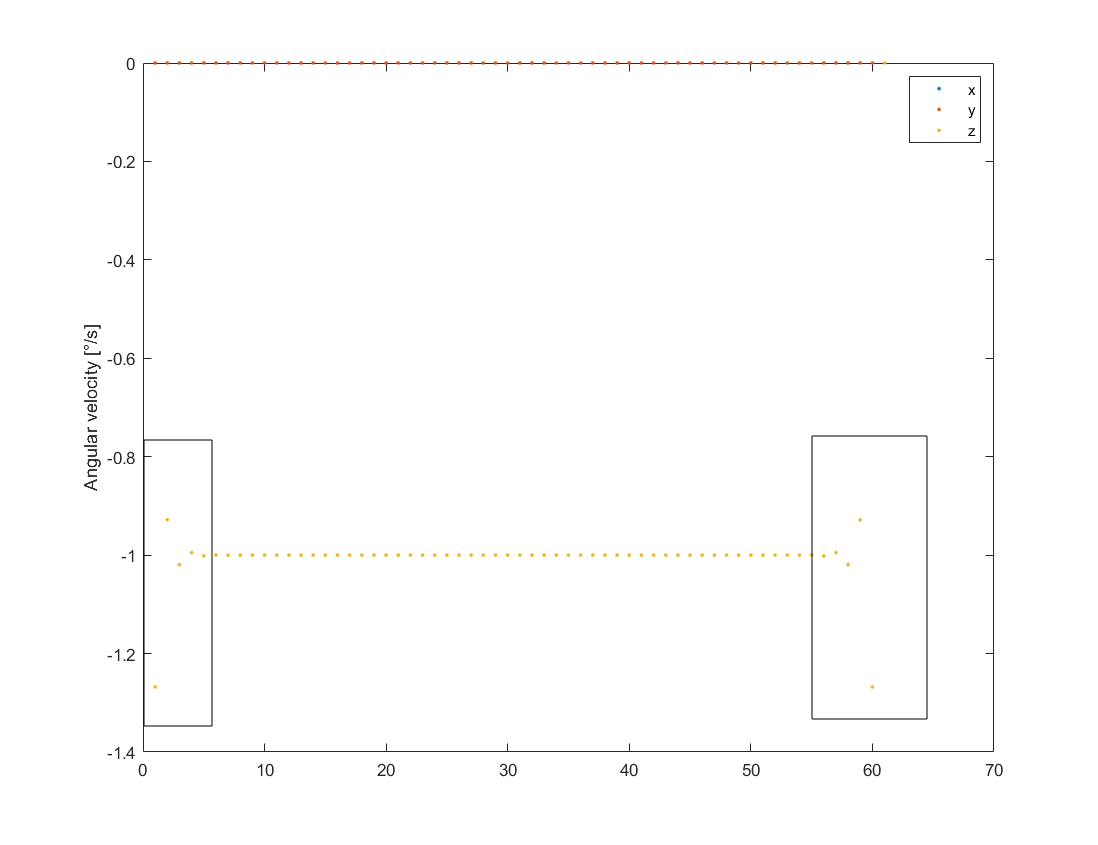 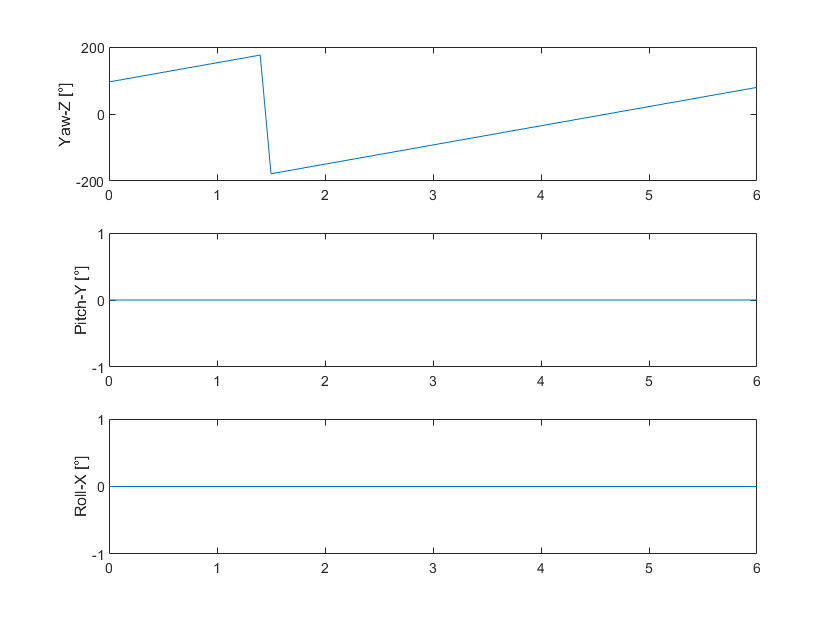 Any ideas where the jumps in the angular velocity returned by the waypoint trajectory object could come from?
Thanks!

⋮
Edited: Effesian on 26 Aug 2022
Ok thanks! Since in my simulation the numer of provided waypoints and orientation samples should be the same as the numer of acceleration and angular velocity samples I get back from that function, I ended using lookupPose() instead of waypointTrajectory(). WaypointTrajectory does some interpolation and therefore leads to some undesired effects (e.g., the zero initial and final values you described.).
See
https://www.mathworks.com/matlabcentral/answers/1782040-how-is-the-number-of-sample-points-returned-by-waypointtrajectory-determined