How to find a linear parameter within a matrix by khowing some of its eigenvalues? 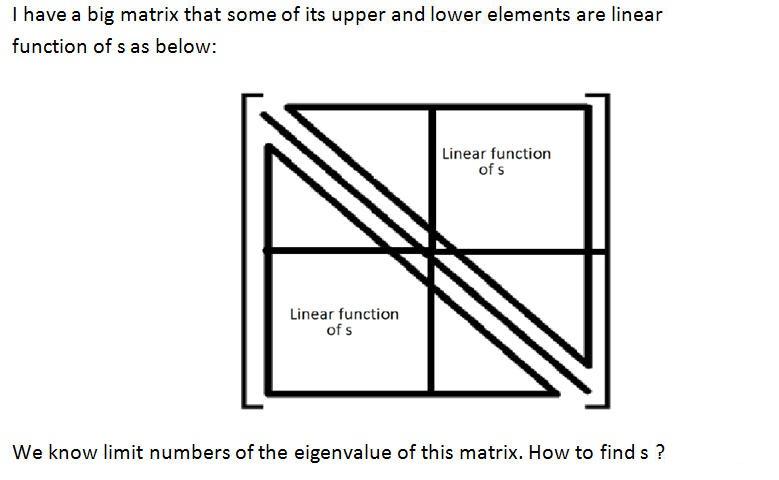 Mehdi on 2 Apr 2017
⋮
My matrix have the form of
syms s
A=rand(1000);
B=s*rand(1000);
C=rand(1000);
M=[A,B;B,C];
I think the problem is clear.
I posed this question in maple forum they proposed a method but my machine could not solve it because of high order matrix. I guess, Matlab is powerful in numerical computations, so switched to Matlab. look at;
http://www.mapleprimes.com/questions/221584-How-To-Find-A-Linear-Parameter-Within

⋮
Edited: John D'Errico on 2 Apr 2017
Accepting your own non-answer is silly, because it is not a solution. And if you know how to solve the problem, then why did you bother to ask it? Having now accepted your own non-answer though, you pretty much ensure that nobody will bother to provide an answer. They will see that you had no serious desire to get any help.
Feel free to TRY to solve that problem. Whatever they told you, and whatever your question really is, it will have no viable solution in any reasonable amount of time. While you can create the matrix M trivially, solving for the eigenvalues is not so trivial. Next, as I pointed out, the solution is rather nasty, because the eigenvalues are not differentiable functions of s.
As for being clear, you never bothered to explain what the phrase "limit numbers of the eigenvalues of this matrix" means, so I never really had any chance of giving a valid answer myself. It is clear only to you, in your own mind.

John D'Errico on 2 Apr 2017
⋮
Edited: John D'Errico on 2 Apr 2017
You need to use actual mathematics to explain what you need. Clear wording, instead of mathematical jargon that you make up on the fly. Sorry, but you do. For example, that you "know SOME of the limit numbers of the eigenvalues" makes no sense at all in mathematics, at least to anyone but you.
Anyway, even if I try to make some wild guesses at what you need to do, computing the eigenvalues of a symbolic matrix (i.e., a function of an unknown parameter s) that is as large as the one you describe will be essentially impossible. And since you apparently know only SOME of those eigenvalues (in the form of a limit?) your question really does not make any mathematical sense.
Finally, computation of the eigenvalues of such a matrix is highly nonlinear, since those eigenvalues are essentially the roots of a polynomial of seriously high order. Since that polynomial is of higher order than 4, there is provably NO analytical solution to such a high order polynomial, so the only approach will be a numerical one. Worse, do not forget that the eigenvalues can effectively change order as you change such a parameter. What that does is make your problem non-differentiable, so it plays hell with any numerical optimizer.
I would recommend that you spend some serious time describing your problem far more clearly. As it is, your question is far too vague to have any answer at all. Even if you do manage to word it in a valid mathematical context, I'll still claim that your problem will be virtually insolvable. That suggests you need to do some serious re-thinking about your problem.

⋮
My matrix have the form of
syms s
A=rand(1000);
B=s*rand(1000);
C=rand(1000);
M=[A,B;B,C];
I think the problem is clear.
I posed this question in maple forum they proposed a method but my machine could not solve it because of high order matrix. I guess, Matlab is powerful in numerical computations, so switched to Matlab. look at;
http://www.mapleprimes.com/questions/221584-How-To-Find-A-Linear-Parameter-Within