These equations have an answer - how to get solve to find it? 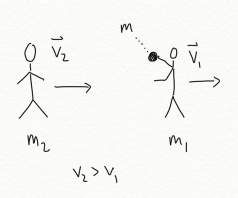 Everything is 1-dimensional. v_1 and v_2 are the initial velocities of the two astronauts. They are both moving to the right. #2 is initially faster. #1 throws a mass (m) to #2, at relative speed u. v_1f and v_2f are their final velocities. So the question is: how fast must #1 through the mass m so that the two astronauts have the same speed after astronaut #2 catches it.
The equations come from the conservation of momentum (m*v).

⋮
Okay, that's interesting. Why didn't `solve` perform those substitutions (the ones you just did by hand) on it's own? I thought it was able to do that kind of thing.

⋮
Hello John,
Had you modified your first answer instead of deleting it, then all the comments including RobNik's post showing the details of the problem would still be here. I thought there was some useful information there.

⋮
David, I took the description and diagram that were lost and added them to my question.

⋮
I think what happens is solve sees those two extra variables and does not see how they can be eliminated. It got confused. Probably it ends up doing some work that led to a complicated mess. Sometimes it is easier for the eye to disentangle things, looking down from above. Computers don't always know how to look for something that makes a problem simpler.
For example, in one of Cleve's recent posts, I recall he took a problem that arrives at no direct solution symbolically, yet by an intelligent set of transformations, has a very pretty solution.

Stefan Wehmeier on 30 Nov 2017
⋮
Why not just solve(expression1 == expression2, u) ?
What you did is to confuse assignemnts/assumptions with equations. You want to assume that v1_f and v2_f are given by certain expressions, and ask for a value of u that makes the two equal. What you typed is the question whether there exists u such that any two numbers v1_f and v2_f automatically become equal to the given expressions, and equal to each other.