How to solve PDE problem

jesse on 27 Jun 2020
⋮
Commented: jesse on 28 Jun 2020
Accepted Answer: Bill Greene
Hi
i solved one of my PDE problems with solve single pde document but i can't use this format for problems like 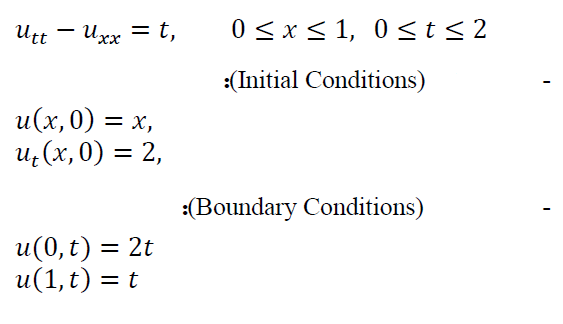 which is a form acceptable to pdepe. However, pdepe, or in fact
any numerical method, will run into problems because at

your
boundary conditions and initial conditions are inconsistent. Mathematically
this is referred to as an ill-posed problem and consequently has no solution.

⋮
thank you very much
it's a big help

John D'Errico on 27 Jun 2020
⋮
Edited: John D'Errico on 27 Jun 2020
This is second order in the time derivative, so there is a utt term. But that should make in not in the realm of pdepe, which allows only ut terms.
Personally, I would just approximate the derivatives using second order finite differences. Convert the entire problem to that of solving a linear system of equations. Given a discretization with nt nodes in t and nx nodes in x, system will be nt*nx by nt*nx. Using sparse to formulate the problem, it will be solvable, though hyperbolic. And that means it may be poorly conditioned, so I would be looking carefully at the singular values and the condition number.
As I said, easily writable. Why not try it? I ask this, because I've never seen a problem as simply stated that was not homework. And if this is homework, I won't do homework. I will help, if you make a credible effort. If you come close enough, I might even show what I would try.

⋮
thank you for your reply.
as you guess it's a homework.
according to your reply i will convert it to a linear system and try to solve it.
thank you again