Prevent a figure/axis from being made current manually

Matt J on 22 Oct 2020
⋮
Edited: Matt J on 22 Oct 2020
Accepted Answer: Matt J
Is there a way to disable the ability of the figure window to automatically become the current figure when a manual user action brings it into focus? I would like to open a figure window or axis which will only be the target of a plotting command when the user explicitly provides a handle to the figure or axis. I know there is a way to do this with GUIDE GUIs and presumably with App Designer GUIs as well, but I would like to do it for any run-of-the mill figure.

⋮
How would you do it for GUIDE ? You can turn off all of the PickableParts, but that does not prevent the figure from gaining focus when the border is clicked ?

⋮
There is a GUI Options dialogue that let's you select this. I assume it is setting some combination of figure properties to make this happen, but I don't know which ones. 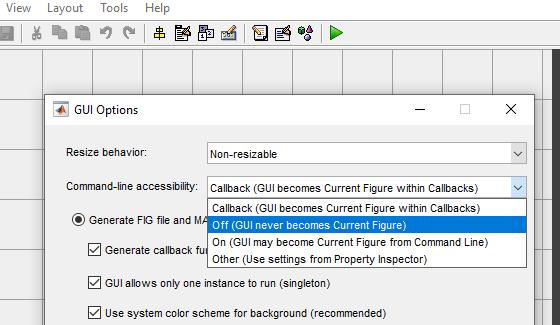 ⋮
No, unfortunately that does not seem to have the desired effect for ordinary figures.