⋮
Why is this line still in your code:
theta = theta + tau*Om; %Euler Method
If you are using RK4, you should delete this.

⋮
That is simply a leftover from trying to convert the prior code from Euler to RK4.

⋮
Well, delete it since it is screwing up your RK4 code.

⋮
The error still remains, though I have a feeling I am missing something.

Jim Riggs on 4 Nov 2020
⋮
Edited: Jim Riggs on 4 Nov 2020
Yes, there are a few things wrong with this code.
James Tursa has identified one obvious error.
Another problem is with the loop indexing. If N is the number of steps, you need to pre-allocate all of your arrays to size N+1 (notice that you assign a value to theta(i+1) inside a loop that goes from 1 to N)
But the biggest problem is that the code contains a serious conceptual error. The Runge-Kutta method provides a numerical estimate for the integration of a function, but you are attempting to produce a double integration. To do this, you need to apply the RK method twice, just like you did with the Euler method : Om = Om + tau*accel and theta = theta + tau*Om. This represents two integrations. Om is the integral of accel, and theta is the integral of Om.
If function f() returns the pendulum acceleration, then the final result of this RK calculation will be omega, not theta.

⋮
Hi Jim, thank you for bearing with these amateur issues. I only have about a month of experience working with Matlab and my professor has very high standards. With the loop indexing issue, the solution to this would be to simply add +1 to every array? As far as the double integration issue goes, should I simply run k1,k2,k3,k4 for theta and say, f1,f2,f3,f4 for Om just like you said?

⋮
For the looping, consider the case where you ask for only 1 step. You still have two data points. The first one is the initial condition, the second one is the output of your integration step. So if N=1, your arrays need to contain 2 values. (i=1) is the initial condition, and (i=2) is the result of the one integration step. The loop goes from 1 to N (for a single step, this would be from 1 to 1), the number of values in each array is N+1.
You preallocate your arrays using a function like:
time = zeros(N+1,1) % Creates an array N+1 x 1 (a column vector) filled with zeros
As far as evaluating the double integral, it is a bit more complicated using higher-order methods like RK4.
First, consider the system that you are modeling: a simple pendulum. This is a kinetic system that is defined by it's position and velocity. 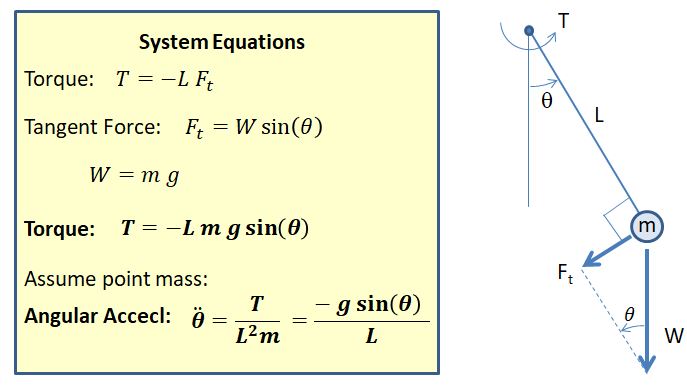 The position (theta) and velocity (omega) are the STATES of the system. You want to propagate these system states in time, and the method for doing that is to apply a numerical estimate of the integral of the state derivatives. So, for each state, we define it's derivative and apply numerical integration over the time step to get the new state at the new time.
I like to think of the states as a vector, for example STATE(1) = theta, STATE(2) = omega.
So I need to define a state derivative vector that corresponds to STATE, I will call it DSTATE.
DSTATE(1) = omega, and DSTATE(2) = accel

⋮
"I do have an error with the code not recognizing 'deriv' in DSTATE = deriv(t,STATE);"
There are two ways to include a function in a script file.
1) Include the function code directly in the script.
2) Save the function in a separate file that is on the Matlab search path.
If you save the function to a file, the file name must match the function name, so function "deriv" must be saved in file "deriv.m"
Also, note that I do not have Matlab on my machine that I use to connect to the forum, so the code that I post is typed freehand (not copied) and is untested. I often will have typos in my posted code, most frequently I forget to include the semicolon at the end of the line. As should be obvious, I have not attempted to provide a complete set of code, but enough to explain the concept. For example, I did not include the definition of parameter "g_over_L" in the derivative function - you decide how it gets into the function. You can hard-code it, or add it to the argument list. So, make sure that you understand everything that I have done, and watch out for my typos.

⋮
Okay, with some thorough debugging, the code does run, but how would I go about graphing this?

⋮
Awesome! That does everything that it should except the graph produced a straight line, so I assume I must have an error somewhere along the line.

⋮
I just noticed in your code that you posted that you initialize values before pre-allocating the arrays. When you pre-allocate, it wipes out the initial values, (fills the entire vector with zeros). Specifically, you set
theta(1) = theta0*pi/180; and then later
theta = zeros(N+1,1);
so that now theta(1) is zero. So watch out for the order of calculation of your variables. You need N to be defined before you can pre-allocate the vectors. And you need to pre-allocate vectors before you initialize the values.

⋮
That's it! Thank you Jim. I really appreciate it. I'm sure I could figure this out, but to save myself the trouble, how do I run the code using multiple initial omega, so omega = 0:2:20 instead of just 0? I get an error when I get to this line:
omega(1)=omega0*pi/180;