Isaac John on 23 Jan 2021
⋮
Commented: Isaac John on 24 Jan 2021
Accepted Answer: Adam Danz
I have two matrices, A (96100x3) and B(16416x3). I need to subtract the XYZ coordinates defined by the columns of B from those of A. But as they are of different resolutions, the difference or setxor is still giving sort of union of these two matrices.
Is there any way I can subtract the region bounded by B from A?
TIA

⋮
Please give an example with A having 5 rows and B having 3 rows and give the expected/desired output.

⋮
Thank you for your patience.
The idea is two subtract the point cloud defined by B from A. Normally, I would have gone for C = setxor(A,B,'rows'), if the rows in B are exactly matching A. Had B been [6 1 2; 1 4 7] instead of the being [6.1 1.2 2.3; 1.2 4.1 7.4], C = C = setxor(A,B,'rows') would have yielded C = [7 2 7; 7 7 4; 5 7 6], which is basically the point cloud B subtracted from A.
But the case that I have is, the given rows of B are not exactly matching with A and hence, setxor(A,B,'rows') does not yield the desired answer.
For instance let A correspond to the point cloud corresponding to a sphere and B correspond to a smaller, concentric sphere. The result (equivalent to setxor) that I am seeking is a hollow sphere, that is a resultant of subracting the smaller sphere from the larger sphere. 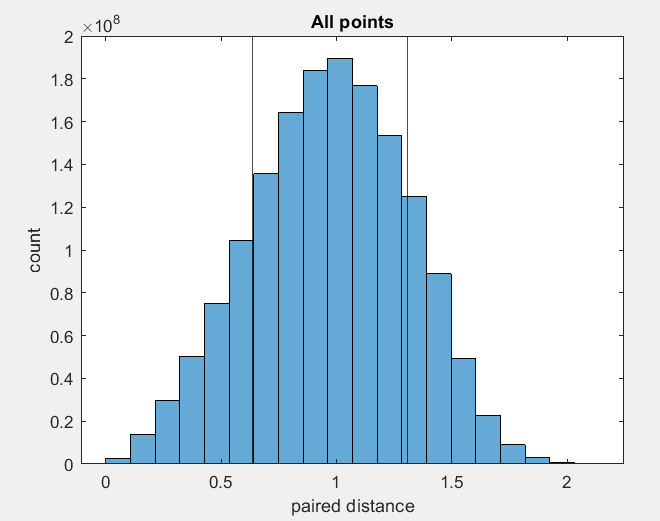 When we look at distances around 0:.2, there is still no clear cluster that would support an objective definition of "near".
figure()
histogram(pd(pd<.2))
xlabel('paired distance')
ylabel('count')
title('Points at distances less than 0.2') 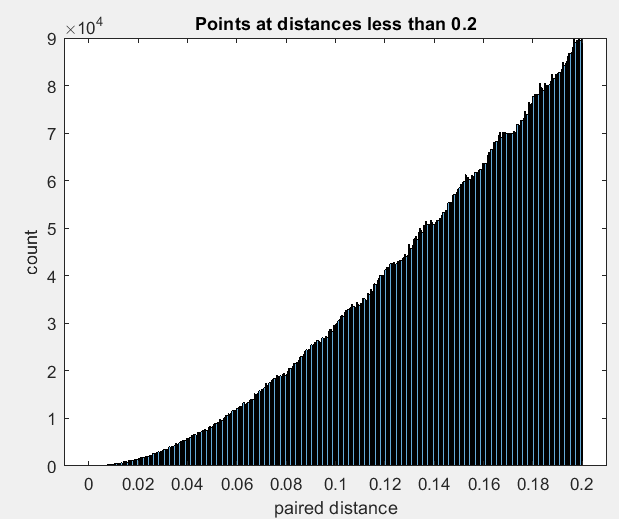 The minimum distance is
min(pd(:))
% ans =
% 0.000316512059369112
If there were a clear definition of "near" you could use that as a threshold to detect and remove "near" coordinates from the pd pair-wise distance matrix. But that isn't clear from the data.
If, on the other hand, you're looking for coordinates that are nearly 1 unit apart in distanced, then the data above do suggest a clear, more-objective way to detect and eliminate paired coordinates at nearly 1-unit distance, though you'll still need to subjectively select a threshold distance from 1.
For example, any pairwise distance within 0.05 of 1 identifies a row of A to be removed.
rmIdx = abs(pd-1) < .05;
A(any(rmIdx,2)) = [];

⋮
Thank you for your valuable help. Its is reall shame that there is not a well defined threshold to define what is near or not. But I think the data in the above matrices are a constant 1 unit apart. Like as you suggested, I still might be able to come up with a defenition of threshold, which I can try.
One more thing, it appears that the pdist2() is not usable and I am getting the "Requested 96100x16416 (11.8GB) array exceeds maximum array size preference..." error. Is there a way over this?

⋮
There can be no well defined threshold because it's a judgment call.
Anyway, pdist2() will not tell you if the points of A are inside the outer shell of points B - it only tells you if they're close, which is not the same thing. For example if the points of A were a shell of radius 20 plus one point at the very center, and the points of B were a shell of radius 19, pdist2() will not tell you that the point of A that's at the center is inside point set B.
You'll have to use
DT = delaunayTriangulation(P)
and then use the isInterior method to determine if the points in A are inside the Delaunay triangulation of set B, and if they are, remove them. 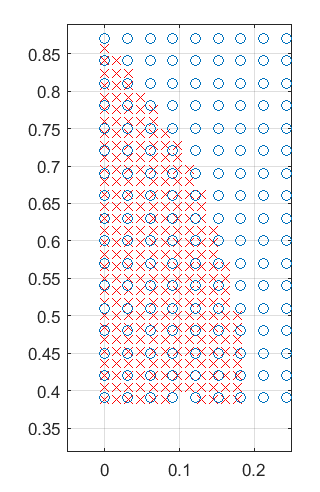 This is only a small portion of your entire dataset. 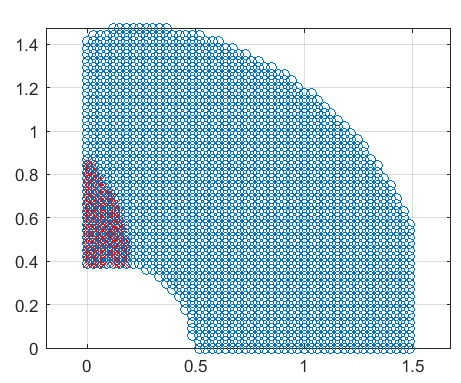 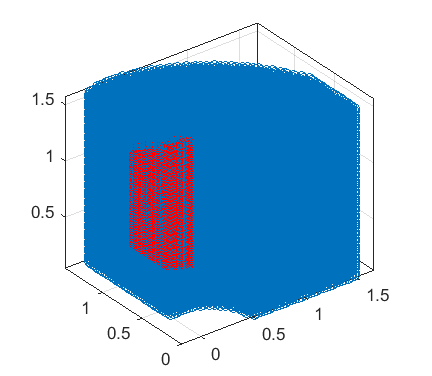 And with this view we also see that the mean distance of 1 between points in A and B is irrelevant because you're only concerned with the portion of overlap and those distances a lot closer than 1.
What you need to do is repeat the pdist2 calculations but only for the section of overlap. That will greatly reduce the number of data points and will prevent the maximum array size error you got.

Image Analyst on 24 Jan 2021
⋮
"For instance let A correspond to the point cloud corresponding to a sphere and B correspond to a smaller, concentric sphere. The result (equivalent to setxor) that I am seeking is a hollow sphere, that is a resultant of subracting the smaller sphere from the larger sphere."
Sounds like you want convhulln(). Use it on one cloud and then test all the points of one to see if the point is inside the convex hull of the other.