Paul on 26 Jul 2021
⋮
Edited: Paul on 26 Jul 2021
Ran in:
For starters, probably shouldn't use inline. Use an anonymous function instead. And I'm going to change the variables involved to be consistent with Matlab's definitions.
randGamma = @(n,lamda) (-sum(log(rand(1,n)))./lamda);
But the bigger problem is that randGamma, as defined, only generates a single output for inputs n and a. Won't you have to call it many times to generate the samples you seek?
Did you really mean that the gamma-distributed random variable is supposed to be the sum of 10000 exponentially-distributed random variables?
Let's assume that random variable G is the sum of 10 i.i.d random variables with exponential distribution with mean 2
n = 10;
mu = 2;
lamda = 1/mu;
Now generate an array of G using randGamma and using exprnd
ntrials = 1000;
G1 = nan(ntrials,1);
G2 = G1;
for ii = 1:ntrials
G1(ii) = sum(exprnd(mu,1,n));
G2(ii) = randGamma(n,lamda);
end
Now compare the experimental and exact CDFs
cdfplot(G1);
hold on
cdfplot(G2)
a = n; b = 1/lamda;
plot(0:50,gamcdf(0:50,a,b))
legend('exprnd','randGamma','gamcdf') 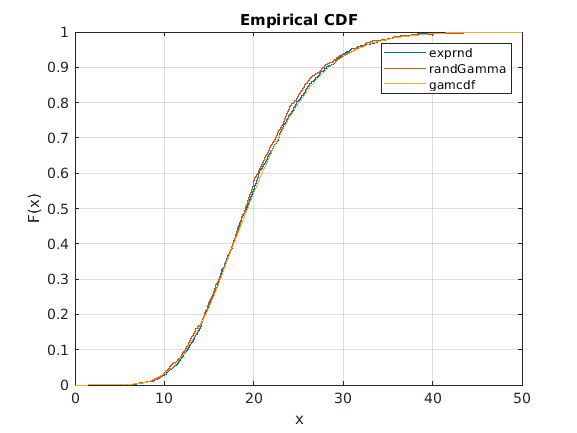 ⋮
First thank you Paul for the great help. I actually used the
(-sum(log(rand(1,n)))./a)
because I used the inverse transform method to generate exponential random variables (where X = -1/a log(U) where U is uniform distributed random variable) . So it would be better to use this expression rather than exprnd.

⋮
Sure, I was just showing that your approach matches what would result from using exprnd. But I didn't want to use 'a' as the argument to randGamma becuse Matlab uses 'a' as the first parameter of the gamma distribution. Alos you could avoid the loop with
randGamma = @(n,lamda,ntrials) (-sum(log(rand(ntrials,n)),2)./lamda);

⋮
Thanks a lot for your help