Jack Walsh on 24 Sep 2021
⋮
Commented: Yanhao Wei on 11 Dec 2022
R2021b has a new editor compared to R2021a. Is there any way to revert to the previous editor? The new version is much more graphically intensive and feels sluggish compared to the simple text editor in the previous version. Also, it renders the Monospaced font differently than the previous version, resulting in the editor font looking completely different to the command window font, which hasn't changed, despite them both using Monospaced.
For comparison, the editor from R2021a: 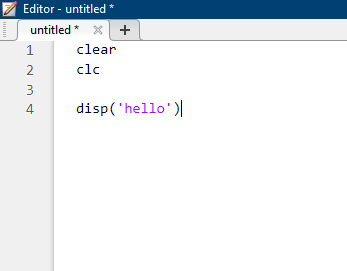 If there is no way to revert the look of the editor, is there at least a way to have it use the same Monospaced font as the command window?

⋮
I'm currently jumping back and forth between 2020b and 2021b on macOS Catalina and the editor in 2021b is quite often unresponsive to my font selections. The Command History and Command Windows are responsive, but the editor takes some selections and not others. It renders my favorite font, Fira Code, in a strong bold that's impossible to change. The editor in 2020b doesn't have these problems, so I'm currently editing using 2020b and testing using both 2020b and 2021b. It's a real bummer. Fonts are everything when you write code all day.

⋮
I never heard of Fira Code before, so I did a search for it. There’s a MATLAB for Windows Instructions page linked to it, however nothing for Mac although Mac OS versions apparently support it.
Likely the best option is to Contact Support including the URL of this thread in the message to them so that it is not necessary to repeat everything here. This could be a bug in R2021b that needs to be fixed, and MathWorks may not be aware of it.
(I like Fira Code, however it has a number of options — specifically the ligatures — that I likely wouldn’t use, so just I’ll keep using Consolas.)

⋮
Yes, I'm using it on a mac and the editor is very sluggish. When I scroll, the scrolling of line numbers is delayed compared to the scrolling of code. It's really ugly. I hope they fix this in 2022a or else I'll be sticking to 2021a unless I really need any new features.

⋮
Edited: Viktor Vajc on 22 Feb 2022
What is the worst for me is that the positions of highlighted parts of code showed in the scroll bar do not correspond to their positions in the editor window. This is super confusing and annoying and makes this useful feature pretty much unusable.
And of course, the new editor is very slow, non-responsive and intrusive. The old editor was superfast and smooth. Unfortunately, I think we won't be allowed to go back to the previous version :-(

⋮
I'm actually uninstalling 2021b and returning to 2021a due to this issue. Mathworks please fix.

⋮
Also, in Preferences-->Font, what is shown for Monospaced, Plain, 10 is identical between 2020b and 2021b, but the editor plays with the font before showing it in 2021b. I annoyingly need to have 2021b installed for certain simulink viewing, but i'm going to stick with 2020b otherwise because the settings actually work.

⋮
I think I have the same issue. Two different versions, same settings, different font display. I think the newer (2022, probably also one or more of the 2021 releases) are using the live editor display environment even for regular (non-live) matlab scripts. They are clearly two very different fonts despite having the same settings. 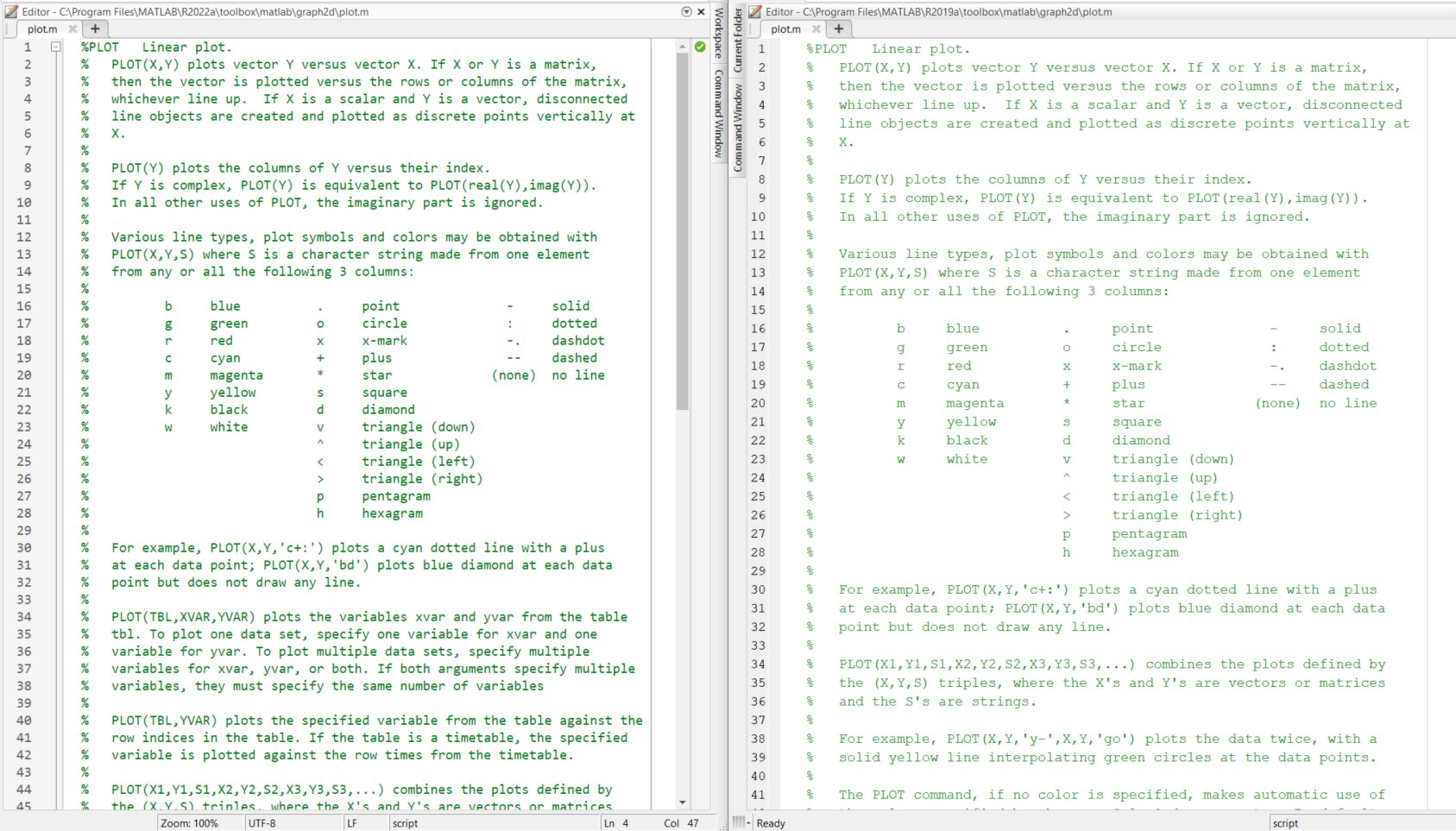 ⋮
I agree that this is very annoying and needs to be fixed. What I found out so far:
The documentation now says: "When the font is set to monospaced, the actual displayed font in the Editor is different than the font displayed in the Command Window and Command History. This is because monospaced is a logical font, not a physical font. To avoid this discrepancy, specify the font name as a physical font, for example, Courier New."
That sounds like an excuse but not like an explanation. Until R2021a, Matlab has been able to render fonts identically in both Command Window and Editor, regardless of whether you choose a logical Monospaced or a physical Courier New. Note: Until R2021a, the characters of Monospaced and Courier New looked the same (at least on my screen), but the line spacing was different.
If I switch to Courier New on R2022a (assuming it's the same in R2021b) and compare it to the older R2021a, I can see that the letters look a bit bolder, although a closer look shows it's more about brightness. (I hope the upload process preserves the effect ...). This occurs only in the Editor, of course.

Using Courier New on R2022a and comparing the Editor to the Command Window, I see that the line spacing is different.
I've not found any solution so far. But I'm afraid this is not a bug but rather a deliberate decision by someone at Mathworks who thought this was cool.

⋮
I found exactly the same problem. The new editor (since 2021b) is sluggish, intrusive and the fonts look different.. I hope mathworks will fix this for new editions

⋮
I agree. Even 2022b editor is sluggish, font not consistent. They need to bring the old editor back.

⋮
Interesting!
I’ve not encountered the software version of those. I’ll search through the other options so I can have a backup in case future preferences also don’t get imported.
.

⋮
This leads to a significantly improved font (in my opinion).