How to sort points for plotting in MATLAB?

Ángel González on 23 Aug 2018
⋮
Edited: MathWorks Support Team on 3 Sep 2020
Accepted Answer: Ángel González
Hello! I've got a little question about plotting points. In my project, I'm getting x and y coordinates and plotting them just when I read them from the socket, and I get something like this: 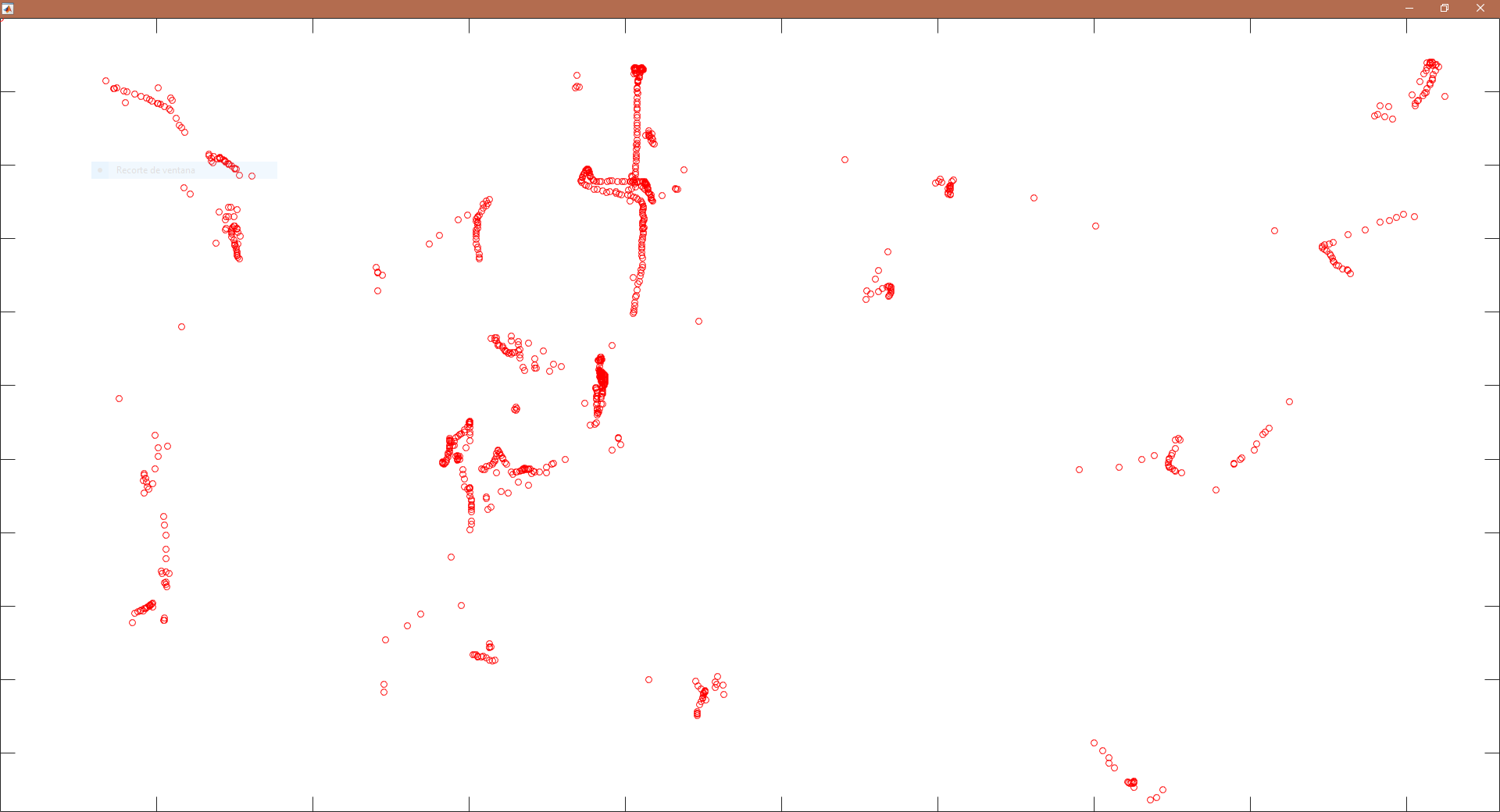 Just after plotting the coordinates I'm indexing them in two different vectors (one for x coordinates and the other for y coordinates). The problem is, when I try to plot them again in another script (or in another figure) the result is not what I expected.
The code I use for plotting the points the second time is:
figure()
for i=1:1000 %1000 is the length of x_vector and y_vector
plot(x_vector(i), y_vector(i), 'o')
hold on
axis([0 1920 0 1080]);
set(gca, 'ydir', 'reverse', 'xaxislocation', 'top')
end
And this is the result of the previous code: 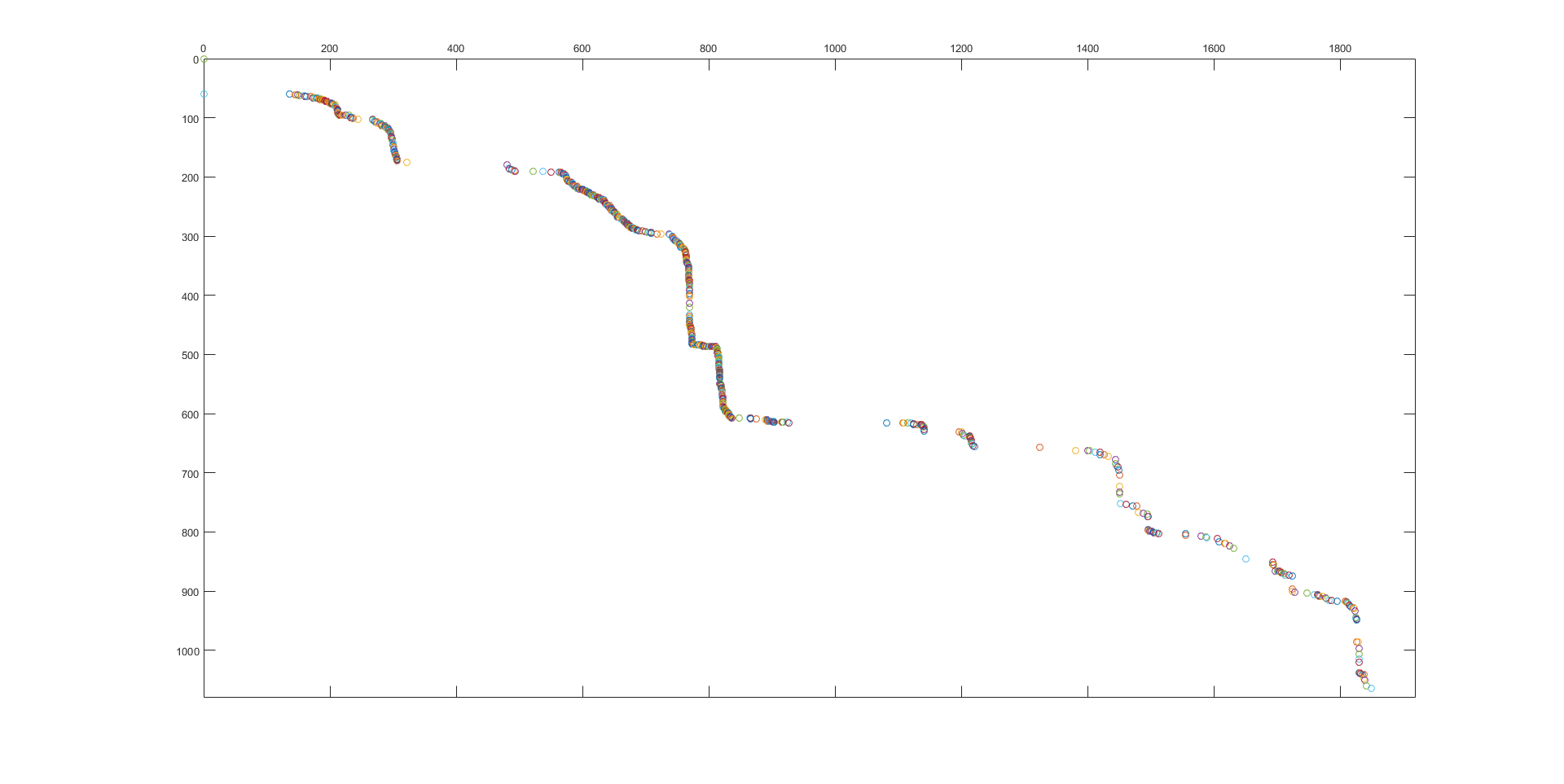 I guess that the second time I try to plot the two vectors plot is trying to print some linear function through some regression instead of printing the cloud of points I expect.
Thank you

⋮
I think we would need to see how the x,y coordinates were stored and the original figure as well, not just the latter.

⋮
I upload the two vectors saved from Matlab.
PS: By using scatter I get a similar result..

⋮
x_vector = sort([x_vector x]);
y_vector = sort([y_vector y]);
And that explains it...you sorted the points independent of each other so the association of x,y is broken.

⋮
@dpb, which solution would you use to storage the x and y values?
Thank you!

⋮
Simply store the points as you receive them...you don't show code but
% preallocate
N=npts;
x_vector=zeros(npts,1);
y_vector=x_vector;
% collect, save...
for i=1:npts
% return x, y, here...
x_vector(i)=x;
y_vector(i)=y;
% do whatever else with x,y during download
...
end
presuming you know a priori how many points you're going to collect. If that is unknown, start with a big number and then remove those not needed.
Alternatively, while it's not efficient to code this way, the dynamic allocation as you wrote above is simple but overhead intensive--
x_vector=[]; y_vector=[];
while stilldownloading()
% get x, y
x_vector=[x_vector;x];
y_vector=[y_vector;y];
...
end
will keep each x,y pair together.

⋮
That's calling sort repetitively every iteration...there's no indication of needing them sorted; if do, far more efficient to wait until done collecting and then sort the whole vector once.
Keeping and reordering y based on order of sorted x is, of course, necessry to keep the association between the two.
Alternatively, one could do slightly differently as
xy=[];
while collecting()
% get x, y
xy=[xy; [x y]];
...
end
xy=sortrows(xy);
and will have x,y in two columns in the one arrray sorted by increasing x

Ángel González on 23 Aug 2018
⋮
Thank you all for helping me. As you said, the problem was how I was storing the coordinates. This comment from @dpb resumed the problem perfectly: https://es.mathworks.com/matlabcentral/answers/416020-how-can-i-plot-points-in-matlab#comment_602802

Afshin Aghayan on 9 Oct 2019
⋮
you can use this code for displaying any data in the form of [x, y, f(x,y)] or data with coordinate
https://www.mathworks.com/matlabcentral/fileexchange/72970-display-data-in-form-of-f-x-y-as-map-and-convert-to-matrix